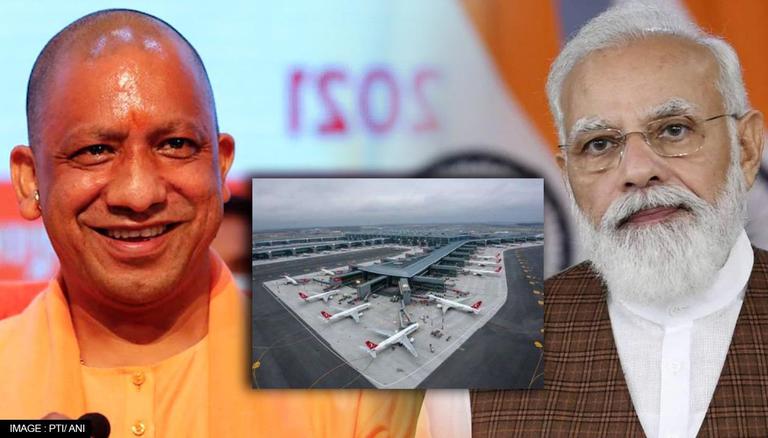 
Uttar Pradesh Chief Minister Yogi Adityanath on Tuesday visited Jewar and reviewed preparations ahead of Prime Minister Narendra Modi's visit on November 25. PM Modi is scheduled to lay the foundation stone of the Noida International Airport at Jewar in Gautam Buddha Nagar.  UP CM Yogi Adityanath boasted about the infrastructural development of the state under his regime and affirmed that airports were now being built even in rural areas.

"Till 2017 there were only two functional airports in the state. Now Airports are being built in remote areas also," the UP CM said adding that the state will be connected with four lanes.

The Uttar Pradesh CM Yogi Adityanath further hit out at Samajwadi Party chief Akhilesh Yadav for politicising the development projects put forward by the BJP led government. "In the past 4-5 years things are going smoothly with positivity. But whenever there is an occasion to inaugurate something people start claiming that we too had thought about this," CM Adityanath said. The mega project is considered to be a major push by PM Modi ahead of the 2022 UP Assembly polls.

As PM Modi is set to lay the foundation stone of the Noida International Airport, the UP government has actively taken steps to ensure that proceedings are in order ahead of the PM's visit. According to an official statement, Uttar Pradesh Health Minister Jai Pratap Singh, who is also the state government's minister in charge of Gautam Buddh Nagar, held a meeting with Jewar MLA Dhirendra Singh and other top officials of the district to review preparations for the Prime Minister's visit.

The minister ordered all concerned officials to finalise their plan of action for the day and make sure that the schedule is held as per plan. He also reviewed preparations for a helipad near the spot where the PM is supposed to arrive.

READ | 'With PM Modi's help, every family in Gorakhpur has own pakka house,' says UP CM Yogi