Gartang Gali wooden bridge in Uttarakhand's Uttarkashi district, which offers a stunning view of the Nelong valley is said to be an ancient trade route to Tibet 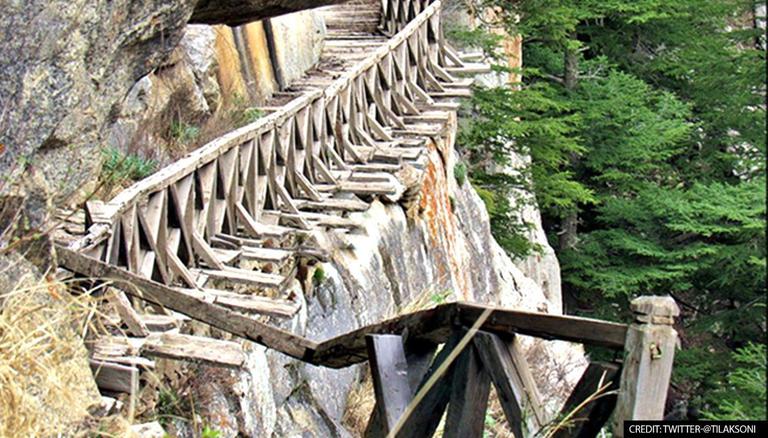 
Its good news for adventure lovers as the Pushkar Singh Dhami-led Uttarakhand government on Wednesday reinstated the 'Gartang Gali', a 150-year-old old wooden skywalk bridge located at an altitude of 11,000 feet, in the Nelong valley in the Uttarkashi district for visitors following restoration.

Snuggled in the scenic Nelong valley, in the Garhwal Himalayas, the tourist attraction is both strategically and historically important for India. The historic bridge was marred over the years following the 1962 Indo-Sino war when the site was declared off-limits by the government.

Gartang Gali bridge, which offers a stunning view of the Nelong valley, is said to be an ancient trade route to Tibet. The remarkable 105-metre wooden bridge in the region is deemed to have been constructed by the Peshawar Pathans. The nomads (Bhotiya tribe) ferried their goods on yaks from this bridge for barter with their other country part. Gartang Gali bridge is set at a distance of 90 km from Uttarkashi.

If you love adventure & the rush of adrenaline,#Uttarakhand is offering you yet another opportunity.
Gartang gali, a 150 yrs old wooden skyway built by Pathans at an altitude of 11000 feet, to carry cross-border trade, has been repaired & opened to tourists,first time since 1962. pic.twitter.com/L27NVmvqf9

The District Magistrate of Uttarkashi Mayur Dixit said, “The Gartang Gali bridge has been refurbished by the department of public works at a cost of ₹ 65 lakh. People who are interested in visiting Gartang Gali bridge will have to register themselves at Bhairav Ghati outpost while following all the COVID guidelines.”

The DM added that from the security point of view, only ten visitors will be allowed at a time and that they will have to maintain a distance of one metre from each other. "Movement of groups or any other activity, such as jumping, dancing, drinking liquor or carrying inflammable substances are prohibited on the bridge,” the Uttarkashi DM stated.

Notably, Nelong Valley was opened for visitors in 2015 after it was shut following the 1962 Indo-Sino war and since then it has become one of the most preferred destinations for adventure lovers. The region provides startling similarity to Ladakh and features high peaks having a similar climate and landscape to that of Lahaul, Spiti Valley, and Ladakh. The cold deserted mountain area offers a panoramic view of the Tibetan plateau. Nelong valley itself looks like a model of Tibet in terms of its topography. Travellers are not allowed to hold an overnight stay in the valley since it comes under the Gangotri National Park, within the 25 km area between Bhairavghati and Nelong. It is home to rare animals such as the snow leopard, blue sheep, musk deer, etc.