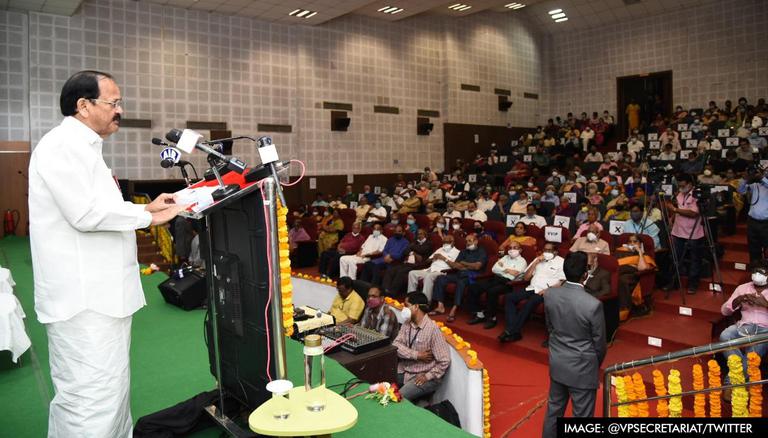 Naidu made these observations while speaking at the launch of a book on the life and parliamentary debates of Umar Alisha, the former priest of Sri Viswa Vignana Vidya Adhyatmika Peetham in Vishakhapatnam.

Addressing the event,  the Vice President highlighted that education of a girl child is one of the major contributing factors to the economic prosperity of individuals, family and nation and said, "The empowerment of women is essential for accelerated national progress."

While paying tribute to Alisha for his role in India's freedom struggle under the British Raj, Naidu described him as a humanist and noted his efforts in the literary and societal reforms as well as for women's empowerment. Referring to the spiritual approach of Alisha, Venkaiah Naidu affirmed that religious and spiritual leaders should impart the message of 'service' to the common people.

"It should be conveyed to the people that spirituality and service are not separate, and they essentially seek social welfare," the Vice President said.

"Spirituality and service are not two different things. Spirituality is not a form of worship. An outstanding lifestyle that boosts our morale. Maintaining our electrical virtue in a trinitarian way. Shri Umar Alisha has shown great meaning in the spiritual path, in practice," Naidu stated.

"It is a pleasure to unveil the biography of Shri Umar Alisha Gari, the former Chairperson of the Shri Vishwavijnana Vidya Adhyatmika Peetha, and a compilation of speeches they made in Parliament before independence. They are mystics who have studied national and international languages as well as mythology," he added.

"Mr. Omar Alisha was a great freedom fighter. He also served as a member of the Central Legislature during the English period. Young people need to know about those who have put into practice the desire for nationalism, equality, fraternity, universal harmony and women's advancement," the Vice President further shared.