Vice President of India M Venkaiah Naidu said on Wednesday that assemblies and parliaments are for debate, discussion, and decision-making, not for disturbances 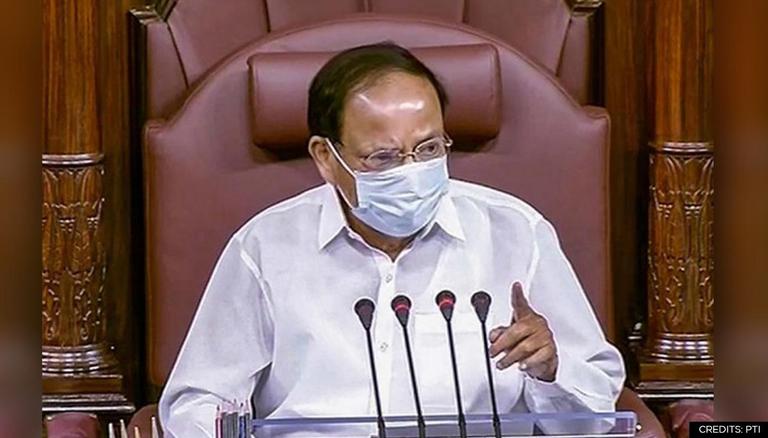 
Vice President of India M Venkaiah Naidu said on Wednesday said that Assemblies and Parliaments were for debate, discussion, and decision-making, and not for disturbances. The Rajya Sabha chairman reminded elected representatives of their obligations, referring to the recent unpleasant incidents in the Rajya Sabha and indicated that action would be taken against individuals involved.

"....all elected public representatives should focus more on improving the standards of the life of the people, by rising to the need of the occasion," stated Naidu

Addressing an event, he noted, "You might have seen some time back, what happened in the Parliament, a lot of youngsters called me and told me, Sir! you are the Vice President of India, why are you so sad? I said I'm sad because of the bad behaviour of some people, to the new low the Indian Parliament had gone."

Vice President Naidu went on to say that every legislator and public representative should keep in mind the need to raise the standards of the institution he or she is representing, and improve one's contribution by calibre, character, capacity, and conduct, citing similar incidents in the past at several state legislatures, including Karnataka.

He said, "You are the role model for the people, if you behave like this then what is the inspiration the people and the youngsters will get?" "Assemblies and parliament are meant for debate, discussion and decision. Debate, discuss and decide, but do not disrupt. Disrupting means you are disrupting the cause of the country. There may be some tension, but you must come back to attention," he added.

'Parliament not meant for disruption'

The Vice President was addressing at a ceremony after presenting the Chairman of the GEF and Ramaiah Group of Institutions Dr M R Jayaram with the Federation of Karnataka Chambers of Commerce and Industry's Sir M Visvesvaraya Memorial Award.

He stated that he was not scared to take action against individuals who were participating in the commotion, he remarked, "I can take action, unnecessary I will take also, but the point is people of the country when they see such things on TV, they will become sad." He expressed hope that things would improve in the days ahead, and that the quality of debate, discussion, and choices would improve, and that interruptions would be avoided, reminding elected representatives that they were voted by the people.

The event was attended by Karnataka Governor Thaawarchand Gehlot and Chief Minister Basavaraj Bommai, during which the Vice President honoured Sir M Visvesvaraya as one of India's great sons, a Bharat Ratna, the founder of modern Mysuru, and a legendary civil engineer.

'Atmanirbhar Bharat should be our motto'

VP Naidu said the younger generation must come forward with new innovations, ideas, and out-of-the-box thinking to accelerate the country's progress, eradicate poverty, end illiteracy, reduce regional and economic disparities, and make the country strong and stable, noting that the Prime Minister has given a mantra of reform, perform, and transform. "We have to move towards Atmanirbhar Bharat, that should be our motto," he said.

With a sense of urgency, the Vice President emphasised the need to come up with wiser solutions to minimise carbon footprint and recycle our resources, saying that development must be accelerated.  "What is required is not only the creation of wealth, what is required is to make the life of the people happier," he said, adding that India has the ability to grow even more in order to construct a "Rama Rajya" free of poverty, anarchy, and discrimination.