Former West Bengal Governor Jagdeep Dhankhar was elected as the Vice President of India on August 6. He won with a thumping majority by securing 528 votes against the joint opposition's candidate Margaret Alva who bagged only 182 votes. The ex-Union Minister was administered the oath of office by President Droupadi Murmu at 12.30 pm today. 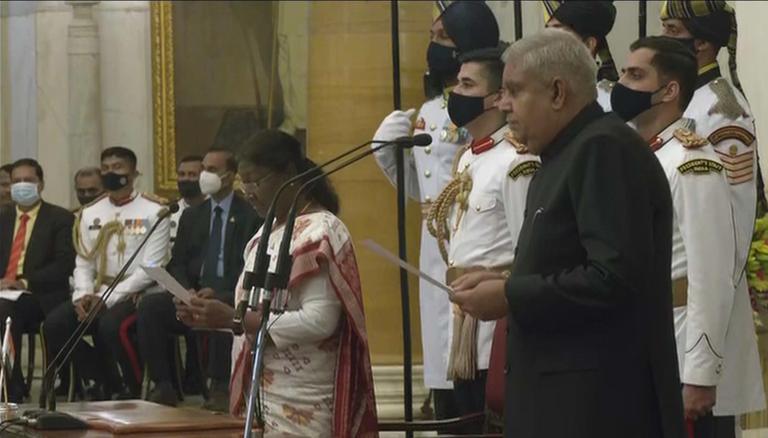 Former West Bengal Governor Jagdeep Dhankhar took oath as the 14th Vice President of India. He will also serve as the de facto chairman of the Rajya Sabha. 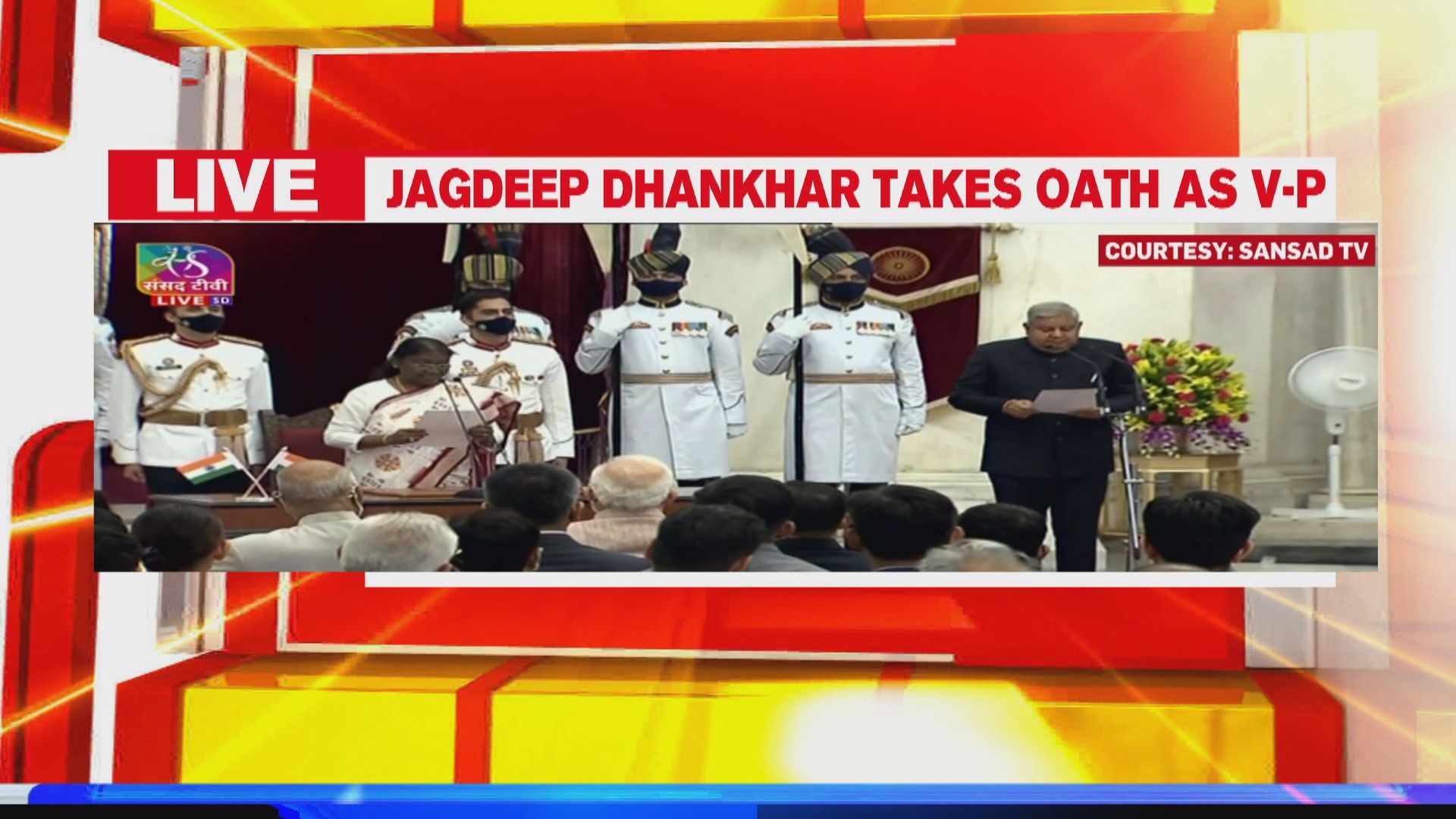 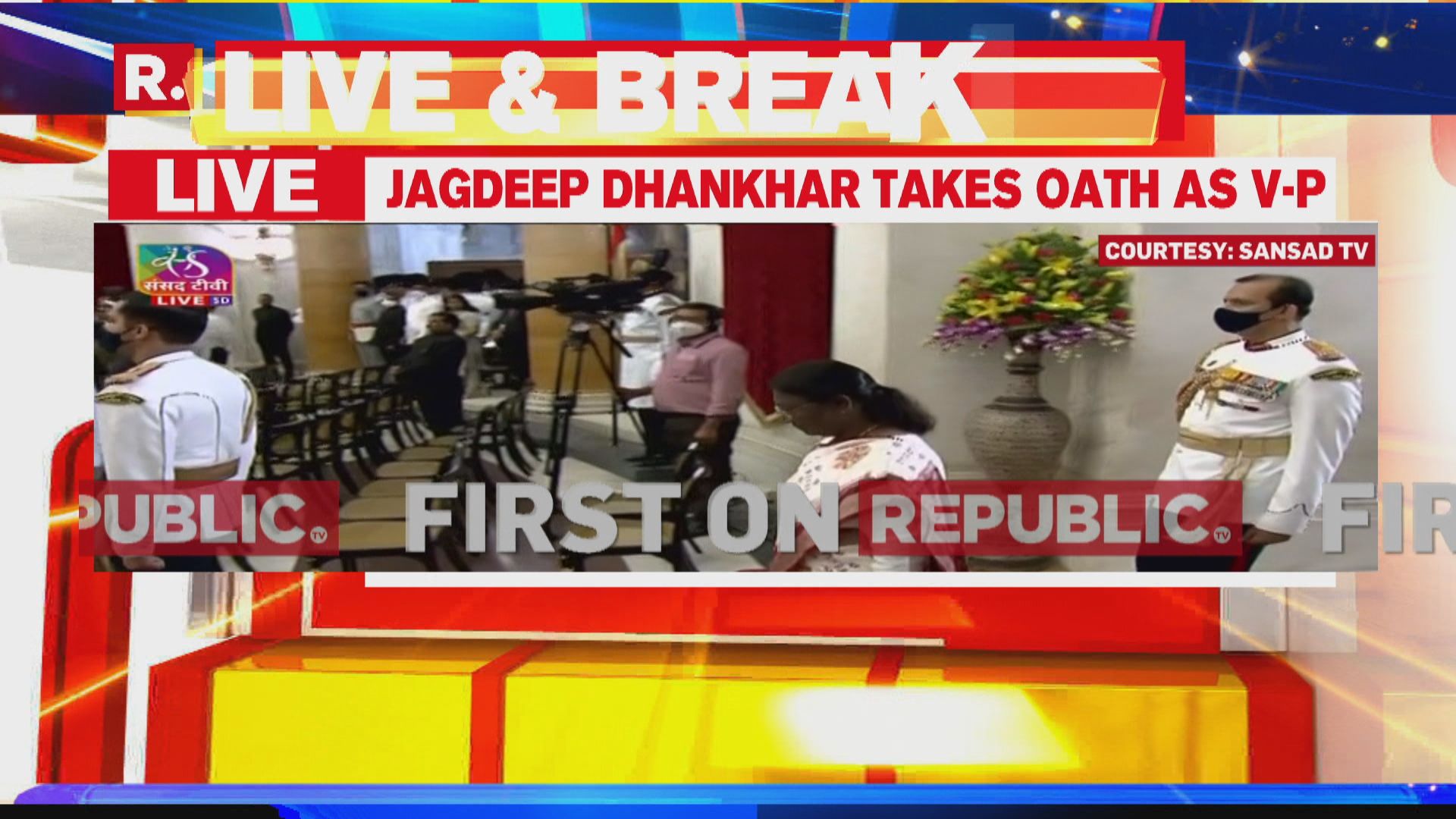 Outgoing Vice President Venkaiah Naidu arrived at the Rashtrapati Bhavan where he was greeted by other attendees such as PM Modi. 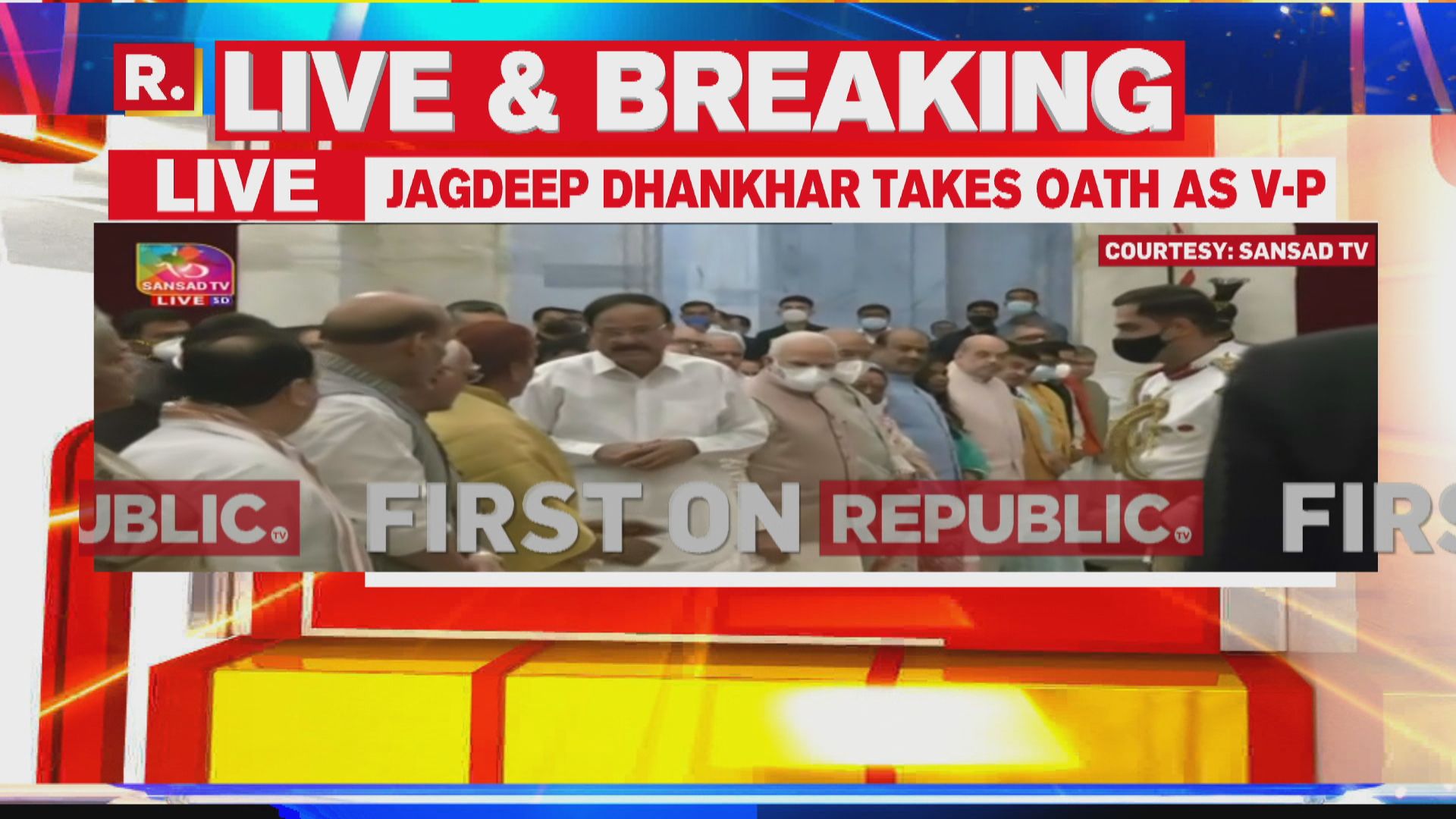 PM Modi arrived at the Rashtrapati Bhavan, where Jagdeep Dhankhar will be sworn in as the 14th Vice President of India.

#BREAKING | Jagdeep Dhankhar takes oath as the Vice President of India; tune in to watch it #LIVE here - https://t.co/9bTKOUNVAU pic.twitter.com/eBzqTdZZn4 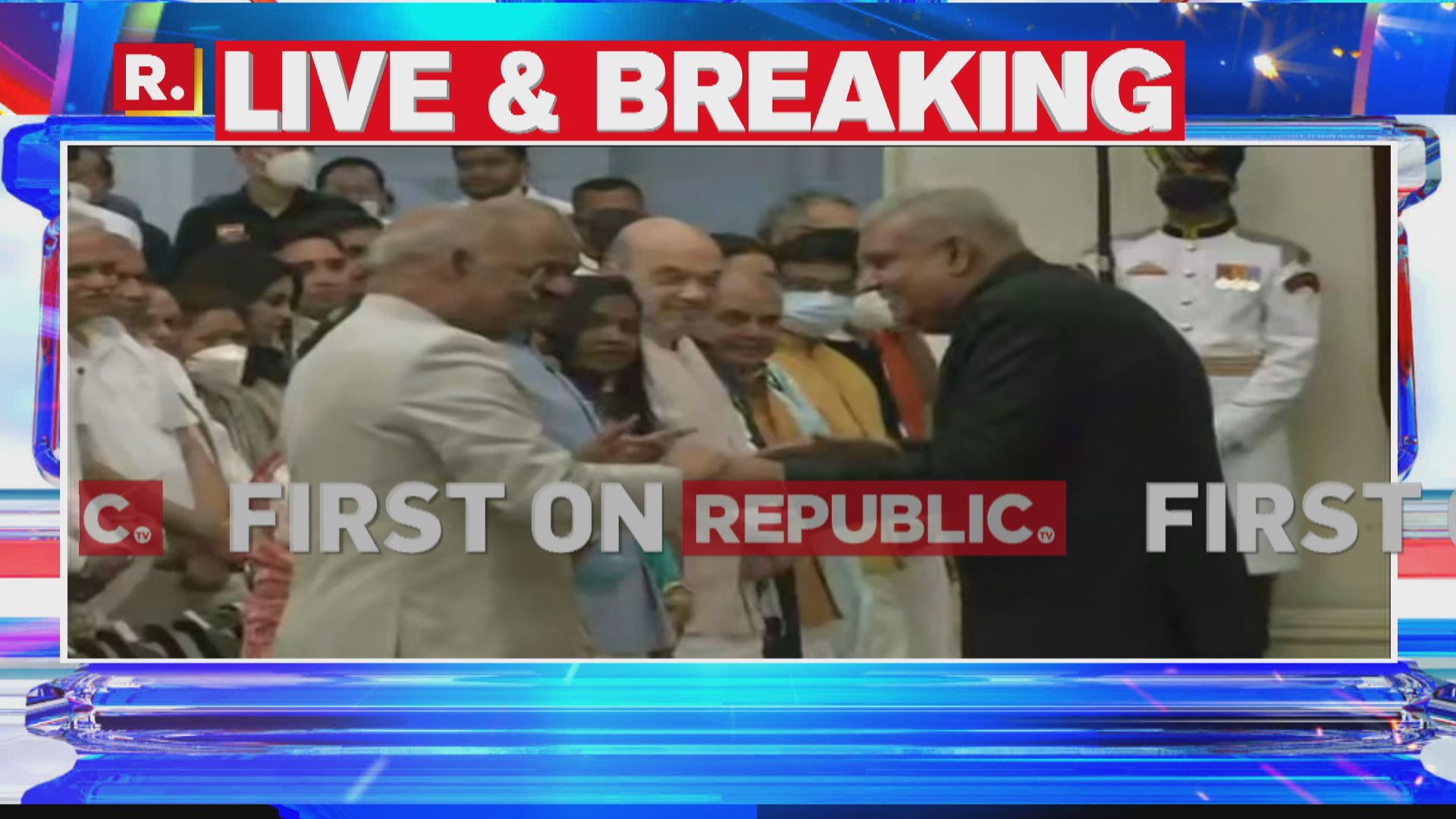 Vice President-elect Jagdeep Dhankar reached the Rashtrapati Bhawan. The swearing-in ceremony will be held in some time.

Even as Jagdeep Dhankhar has been elected the Vice President, a new controversy on Wednesday erupted as BJP MP Sushil Modi claimed that Nitish Kumar wanted to be a contender for the post. Rubbishing this claim, Bihar CM Nitish Kumar said, "You heard a man say that I wanted to be Vice President. What a joke! It's bogus. I had no such desire. Did they forget how much did our party support (the NDA candidate) in President-VP polls?.. Let them talk against me so that they get a position again".

#WATCH | "You heard a man (Sushil Modi) say that I wanted to be Vice President. What a joke! It's bogus. I had no such desire. Did they forget how much did our party support in Pres-VP polls?..Let them talk against me so that they get a position again," says Bihar CM Nitish Kumar pic.twitter.com/sj9Q7lqvbh

UP CM Yogi Adityanath called on Vice President-elect Jagdeep Dhankhar in the national capital on August 10.

"Felt blessed, inspired and motivated to be ever in service of Bharat in the serene sublimity of Raj Ghat while paying respects to Pujya Bapu," Jagdeep Dhankhar observed after paying homage to Mahatma Gandhi.

Felt blessed, inspired and motivated to be ever in service of Bharat in serene sublimity of Raj Ghat while paying respects to Pujya Bapu. pic.twitter.com/Uzh85n47LN

Jagdeep Dhankhar is the second leader from Rajasthan after Bhairon Singh Shekhawat to get elected the vice-president of India. With the election of Dhankhar, a Jat leader who belongs to the Jhunjhunu district, now both the lower and upper houses of Parliament will be presided over by leaders from Rajasthan. Lok Sabha Speaker Om Birla is also from Rajasthan. He represents the Kota-Bundi parliamentary constituency of the state. In Jhunjhunu's Kithana village, everyone from women to men and children to the elderly were present at Dhankhar's house and danced in celebration of his victory.

People distributed sweets in the entire village. Celebrations also took place at the state BJP headquarters in Jaipur where people danced to the beats of dhols and distributed sweets. Chief Minister Ashok Gehlot congratulated Dhankhar on his victory.  Earlier, Bhairon Singh Shekhawat held the office as the 11th vice-president from August 2002 to July 2007. Villages of both Shekhawat and Dhankhar are in Shekhawati region, which comprises Sikar, Jhunjhunu and nearby areas.

Delhi | Vice President-elect Jagdeep Dhankhar pays tribute to Mahatma Gandhi at Rajghat. He will take oath as the 14th Vice President of the country today. pic.twitter.com/8vvvwCrb2z 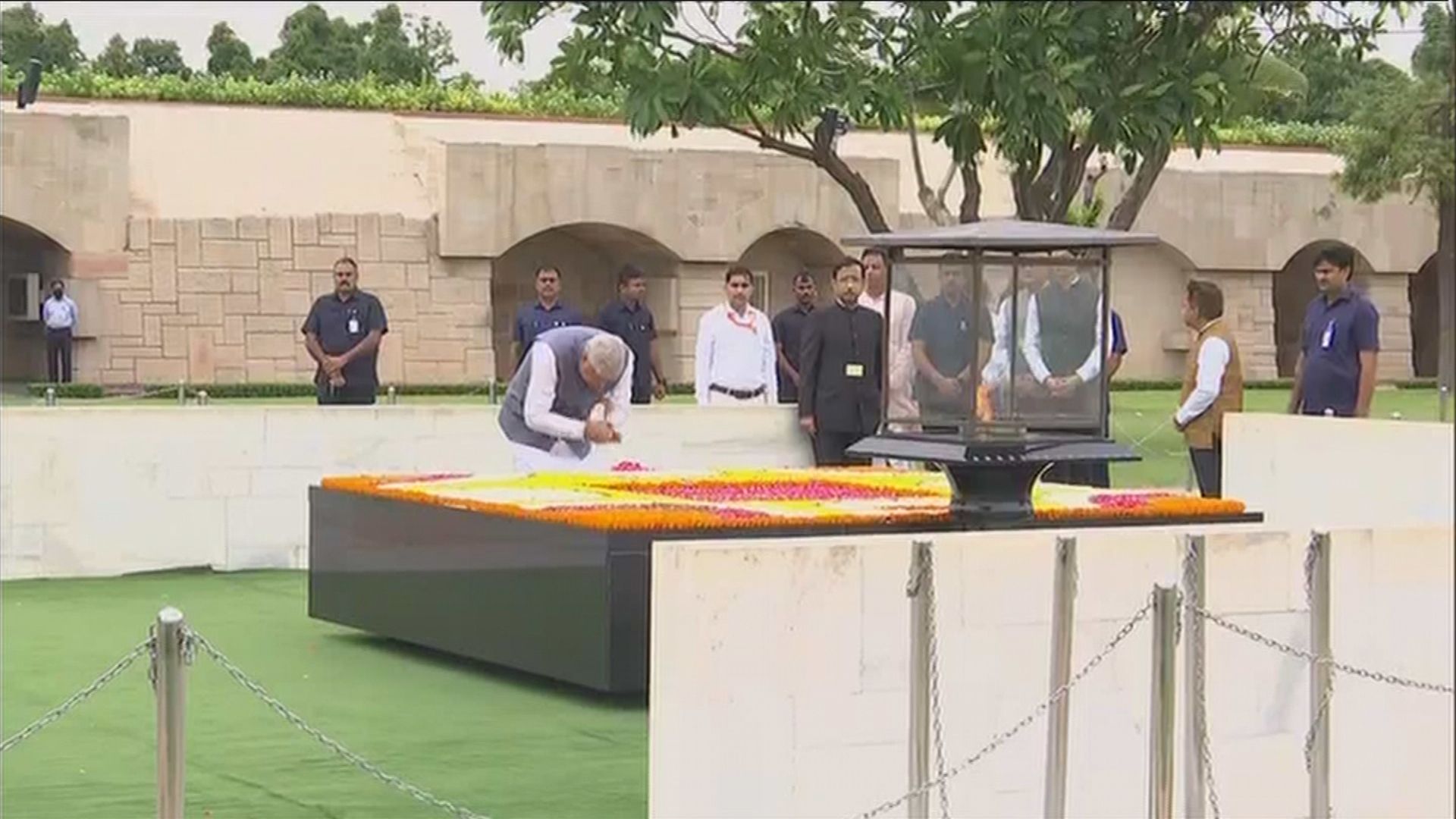 Vice President-elect Jagdeep Dhankhar will begin the day by visiting Rajghat and paying his respects to Mahatma Gandhi.

I will begin the day by visiting Raj Ghat and paying my respects to Pujya Bapu at 8.30 AM at Rajghat.

Since taking over as the Governor of West Bengal in July 2019, Jagdeep Dhankhar was at loggerheads with the Mamata Banerjee-led government. While the Governor has stressed that he is exercising his constitutional duties, TMC has accused him of interference and sought his ouster on multiple occasions. On January 7, the WB CM created a stir by telling PM Modi about Dhankhar raising objections over some recruitments. She spoke about this at the inauguration ceremony of the second campus of Chittaranjan National Cancer Institute which was attended by the PM virtually.

According to her, the WB Governor was unaware that the state government had opted for later entry into the bureaucracy on the advice of PM Modi. Objecting to this statement, Dhankar asserted that it was not only factually wrong but also constituted an act of "impropriety" on Banerjee's part. On the first day of the Budget session in March, Dhankhar was unable to give his inaugural address to the Assembly as BJP MLAs carrying posters and photographs of alleged victims of civic poll violence came to the well to stage a protest.

As the legislators of the JP Nadda-led party refused to let the proceedings begin, he attempted to leave the Assembly even as ruling party MLAs including Mamata Banerjee appealed to him to deliver his address. The Governor alleged that women Ministers and MLAs trooped on both sides of his seat disregarding decorum and propriety. In June, a fresh controversy erupted as the WB Assembly passed bills removing the Governor as the Chancellor of state-run universities and the 'Visitor' of private universities.

Born on May 18, 1951, Dhankar is a former Lok Sabha member (from 1989 to 1991) and is currently serving as the Governor of West Bengal. He hails from a small village in Rajasthan's Kithana in the Jhunjhunu district and completed his school at Sainik School in Chittorgarh. In the following years, he was admitted to Maharaja’s College at the University of Rajasthan in Jaipur and graduated with B.Sc in Physics and later took up an LLB course in 1978 at the University of Rajasthan and completed his education in the year 1979.

Dhankar was later enrolled in the Bar Council of Rajasthan as an advocate on November 10 of the same year.  A former advocate of the Supreme Court of India, he has also served as the President of the Rajasthan High Court Bar Association in 1987, the youngest in that position. The WB Governor entered politics after becoming a Member of Parliament (MP) from the Lok Sabha constituency Jhunjhunu in 1989 and a Union Minister in 1990 while representing the Janata Dal at the time.

Currently a BJP member, he has been associated with the saffron party since 2003. Later in 1993, he was elected as the Member of the Legislative Assembly (MLA) from Rajasthan's Kishangarh in Ajmer district and served in the post for five years till 1998. Dhankhar was appointed as the West Bengal Governor by the incumbent President Ram Nath Kovind on July 30, 2019.

As Venkaiah Naidu was due to retire on August 6, an election was held to fill this impending vacancy on August 6. The Vice President was elected by the Electoral College comprising 788 members- 233 elected Rajya Sabha MPs, 12 nominated MPs of the Upper House and 543 elected MPs. While speculation was rife that Mukhtar Abbas Naqvi whose Rajya Sabha term ended earlier this month would be nominated as the NDA's candidate for the Vice President election, the ruling coalition reposed faith in former Union Minister and West Bengal Governor Jagdeep Dhankhar.

On the other hand, opposition parties barring TMC announced Margaret Alva as its candidate. On the same day, Dhankhar won with a thumping majority by securing 528 votes against Alva's 182 votes. 725 parliamentarians cast their votes, which round up to 92.9 percent voting in the vice-presidential election. However, 15 votes were found to be invalid, said returning officer Utpal Kumar Singh. He will be administered the oath of office by President Droupadi Murmu at 12.30 pm today.