Vivek Oberoi took to his Twitter to write a message for Rahul Gandhi. Here's what the actor wrote:

Ahead of Lok Sabha Vivek Oberoi starrer 'PM Narendra Modi' biopic which was scheduled to release on April 5 got postponed to April 11. Oberoi took to Twitter on Saturday morning and gave the reason behind the same. He said: "Hum sabne bohot mehnat karke ye film banayi hai lekin kuch logo ne humein itni boori tarah se gher liya. We are trying our best to release the film. I thank the Indian Judiciary and now on Monday we will head to Supreme Court and I hope we get the support.

Vivek Oberoi opened up in an interview with ANI and said: "There are very powerful people who have approached courts through their lawyers. They can obstruct us briefly but they won't be able to stop us. The release might have been postponed but we are firm in our resolve."

A few minutes back, Vivek Oberoi tagged Rahul Gandhi in his tweet and wrote: "Dear @RahulGandhi ji, on Monday morning in the Honorable Supreme Court, will you also try to stop your alliance partner @laluprasadrjd ji’s autobiography? Or is it just our film you’re after? Is this not #hypocrisy? #DoubleSpeak @yadavtejashwi @INCIndia
#PMNarendraModi" [sic]

For those unaware, the autobiography of former Chief Minister of Bihar Lalu Prasad Yadav titled 'Gopalganj to Raisina - My Political Journey' will hit the stands soon. The book has been co-authored by Nalin Verma and to be published by Rupa Publications. 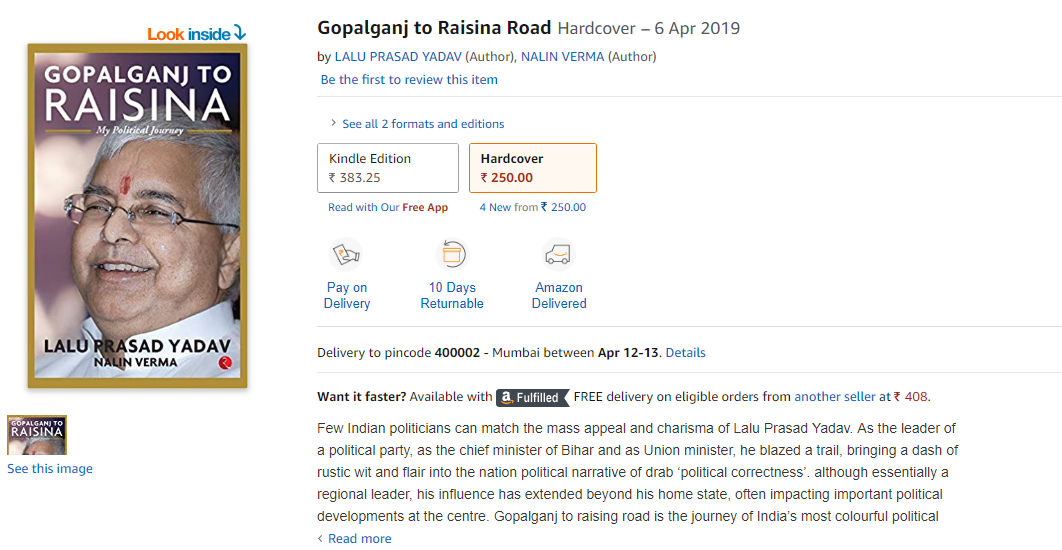 Coming back to the film, as the makers describe: 'PM Narendra Modi' " It is the inspiring saga of a man, a politician, a leader and a Visionary". They reveal that the film "covers his 64 - year epic journey, from abject poverty, selling tea on a railway station as a chaiwallah (tea seller) to becoming the Leader of the world’s largest democracy!" and identify it as "the shining symbol of the victory of a common man".

The biopic is directed by Omung Kumar, who has previously helmed some critically acclaimed biopic films including 'Mary Kom' and 'Sarbjit'. It will be produced by Suresh Oberoi and Sandip SSingh under the banner of Legend Global Studio and is all set to hit the theatres on April 11, 2019.