The fact that Hollywood star Leonardo DiCaprio shared his concern regarding the water crisis in Chennai, showed how big the issue is. WATCH: ‘Lakes, ponds need to desilted on war-footing basis’, says Rajinikanth as he praises Rajini Makkal Mandram for water distribution efforts.

The fact that Hollywood star Leonardo DiCaprio shared his concern regarding the water crisis in Chennai, showed how big the issue is. Closer home, while efforts are on to solve the problem, Rajinikanth's supporters did their bit by distributing water through tankers in the city. The superstar has now lauded his group of supporters for their efforts while asserting that such work is on since quite some time now, but it is being noticed now. The ‘Petta’ star shared that saving water, which could be done by desilting lakes and ponds, was the need of the hour.

Rajinikanth’s Rajini Makkal Mandram, an organisation consisting of his fans/supporters, had recently distributed water in the Kodambakkam area in tankers having images of the actor. 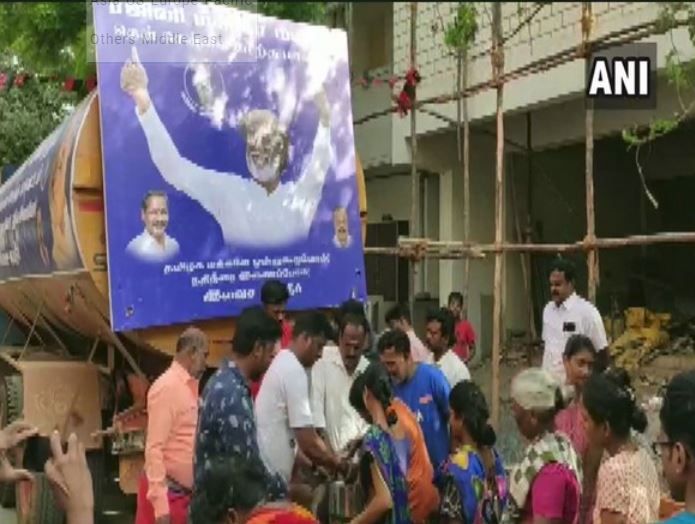 When asked about it at the Chennai airport on Saturday, after he returned from the shoot of ‘Darbar’ in Mumbai, Rajinikanth said, “I really appreciate them for their efforts and they are doing a great work.”

The actor was then asked if the gesture by Rajini Makkal Mandram was a start to the work done by his political party. He replied, “We have been doing that work continuously, people have started noticing it only now.”

On efforts he feels the government should take, the 68-year-old said, “We should start saving rainwater immediately. The water bodies like lakes and ponds should be desilted and this should be done at a war footing basis. The rainwater should be saved.”

(Watch the video above)

The state of Tamil Nadu, especially cities like Chennai are facing acute water scarcity for almost two months now. The city is provided from four reservoirs - Poondi, Chembarambakkam, Puzhal and Cholavaram whose capacities have dipped below 1% of the demand hence fail to supply water to Chennai. The city receives its water from its three main desalination plants and other tankers and pipelines.

#Regram #RG @bbcnews: "Only rain can save Chennai from this situation." A well completely empty, and a city without water. The southern Indian city of Chennai is in crisis, after the four main water reservoirs ran completely dry. The acute water shortage has forced the city to scramble for urgent solutions and residents have to stand in line for hours to get water from government tanks. As the water levels depleted, hotels and restaurants started to shut down temporarily, and the air con was turned off in the city's metro. Officials in the city continue to try and find alternative sources of water - but the community continue to pray for rain. Tap the link in our bio to read more about Chennai's water crisis. (📸 Getty Images) #chennai #watercrisis #india #bbcnews

READ: WATCH : 'Man Suffers More From The Lack Of Water Than From the Access To It' Says PM Modi Quoting Dr. Ambedkar Over India's Acute Water Crisis

Chennai city requires around 850 Million litres of water per day out of which only 525 MLD of water is only been supplied every day to the city through the metro tanker lorries which was agreed by the municipal corporation minister SP Velumani during a press conference.

The streets of Chennai has seen people standing with plastic pots everywhere for several hours a day from, people who have booked a tanker lorry and waiting for several days to get it delivered to their doorsteps because of the high demand.