Tej Pratap Yadav, RJD chief Lalu Yadav's elder son always finds  a reason to be in the news and rarely has it been a major political development. In a huge contrast to his father, who led his party - the RJD to rule the state of Bihar for 15 years, it seems as if Tej Pratap only claims that he is the 'real blood of Lalu Yadav and the one who follows his footsteps.' In a new video that has surfaced and has been widely circulated all through the whatsapp group, Tej Pratap is seen walking into a gym. He is then seen picking up a weights and exercisisng. The edited video has a groovy music playing in its background as Tej Pratap goes on with his exercise. A few days ago, he also got a new hairdo - curled his straight lengthy hair to look like this: 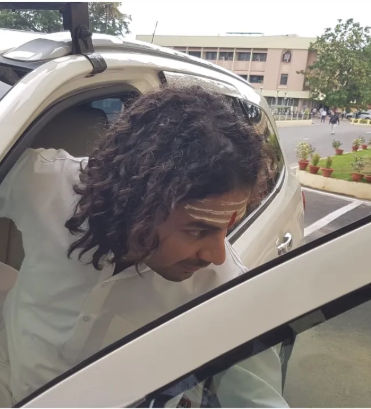 A major family feud seems to have broken within the Lalu Yadav family, as sources report on Friday, that RJD leader Tejashwi Yadav skipped the party's 23rd Foundation Day celebrations in Patna. Sources report that Tejashwi is allegedly miffed with elder brother Tej Pratap who attended the celebrations with mother Rabri Devi and other senior RJD leaders. Tejashwi, who is the Leader of Opposition in the Bihar Assembly is also yet to attend the Bihar Vidhan Sabha session, as per sources.

Tej Pratap brushing aside rift between Tejashwi and him

Threatening that anyone who comes between the two brothers (referring to themselves as Krishna and Arjun) will be destroyed by his 'Sudarshan Chakra', Tej Pratap dispelled rumours of a rift between the brothers. "In social media, various cartoons were made that now there is a rift between both brothers. . People are making false claims that ow there is no connection left between them, the brothers have split up... will beat him us (dhar ke cheer denge). Whosoever will come between Tej and Tejashwi, Krishna and Arjun will have to bear the wrath of 'Sudarshan chakra' of Shri Krishna," Tej Pratap said addressing the gathering. He also made a pro-women comment asking women to be seated ahead at the event to progress ahead.

#WATCH Tej Pratap Yadav at RJD foundation day programme in Patna: Please get aside & let women come forward. If women have to progress, they have to be in front. Wherever my program is held, I make women sit in the front, like my father used to do. (05.07.2019) pic.twitter.com/JW7t28XDyu

Meanwhile, Lalu Prasad Yadav's elder son Tej Pratap has also been active on Twitter and has stood for his brother after hinting a tussle between them throughout the Lok Sabha elections. He tweeted the picture below and ask people to join his drive.