It has come to be that the FIR filed after the attack on Arnab Goswami and Samyabrata Ray Goswami doesn't mention the Youth Congress, though it should

Even as Mumbai Police filed a case ten hours after the complaint on the physical attack on Republic Media Network's Editor-in-Chief Arnab Goswami & Republic TV Editor Samyabrata Ray Goswami was made, it has come to be that the FIR has been severely watered down.

The move to not name the Youth Congress in the FIR despite the attackers confession on their affiliation to Arnab's Mumbai Police security attache who is an undersigned in the complaint copy, comes despite Arnab Goswami, in an on-camera interaction, imploring the Mumbai Police to do so.

"My security personnel is here, I need to see his statements. Because you are manipulating. It is not the question of shown to me, in the original complaint there were signatures of all, you then changed it and you tried to make it only mine. I need proof on it - that my security personnel has said that the attack was done on me by Congress workers - that is the most important thing. He is here, he has said it, all I want from you is that part must be included. He has said it. Tomorrow you can say that I am saying it and there's no proof of it so I won't believe you."

The Mumbai Police then said that his statement will be immediately recorded. Arnab Goswami responded, "simultaneous or not, otherwise, my statement has no credibility without his." In another video, Arnab's Mumbai Police security personnel said, "Yes the attack was done by Congress workers, I have told this to the Police here."

FIR watered down: What it should have mentioned

The FIR, which is egregiously watered down, has no mention of the Congress and the Youth Congress despite the complaint copy which mentioned all the details of the Congress link, including their confessions to Arnab's Mumbai Police security attache, as also the photos and official party designations accessed by Republic. Furthermore, the filing of the FIR had also taken considerable effort.

It has been filed only under Sections 341 (Punishment for wrongful restraint) and 504 (Intentional insult with intent to provoke breach of the peace) of IPC.

However, the following sections of the IPC were not invoked - IPC Section 120 for Criminal Conspiracy, 337/338 (causing hurt / grievous hurt by act endangering life or personal safety of others), Section 349 (force), 350 (criminal force), 351 (assault), 352 (punishment for assault), 355 (Assault or criminal force with intent to dishonour person otherwise than on grave provocation), 425 /426 (mischief), 503 (criminal intimidation). Neither did the FIR named Congress workers or the party.

However, in the complaint filed by Arnab, he has stated, "Mumbai Police personnel arrived in another 5 minutes and Mr Shivaji Hosmani who is deputed for my personal protection informed me that the attackers had identified themselves as members of the Youth Congress who had been sent by higher-ups to teach me a lesson. Within 10 minutes, Police inspector of NM Joshi Marg Mr Yogendra Pache came in and in his presence the entire account was repeated by Shivaji Hosmani, my Mumbai Police Security personnel about the attack on me by Youth Congress workers. In another 10-15 minutes, DCP Abinash Kumar reached my parking lot and in order to put things on the record, Mr Shivaji Hosmani recounted for a third time the whole incident and that the attackers were from the Youth Congress. I offered to go and file an FIR at the NM Joshi Marg Police station. DCP Abinash told me there was no need to do so immediately and that he would make sure the complaint was written and call me later to verify the facts."

The attackers' confessed to Arnab's Mumbai police security after being apprehended that they were Youth Congress workers sent by party higher-ups to teach him a lesson. The goons who are now in the custody of Mumbai Police, post their confession. Republic Media Network has accessed the Facebook and Twitter profiles of the two attackers which show that they are workers of Youth Wing of the Mumbai Congress. In one of the pictures, an attacker can also be seen with Senior Congress leader Mallikarjuna Kharge. Moreover, within hours after the physical attack, Congress leader Alka Lamba celebrated the attack. She went on to hail the Congress Youth Wing. Alka Lamba in a tweet posted at 3 AM on Thursday wrote, "Long live youth Congress." 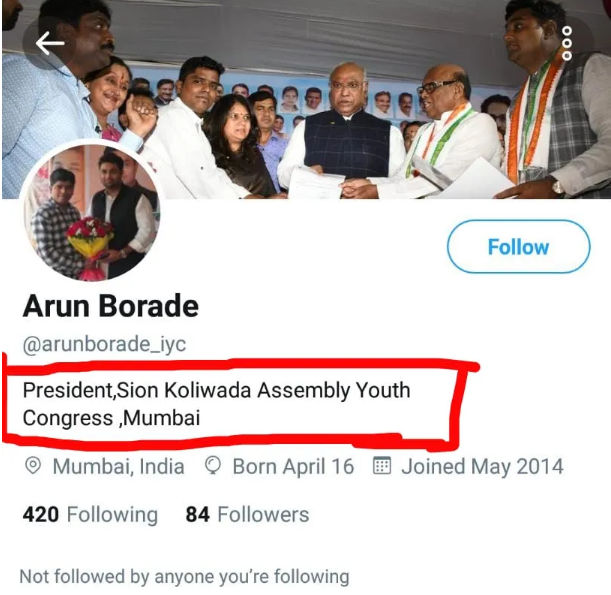