During the COVID-19 pandemic, PM Modi got a 3D model of the Kashi Vishwanath Corridor built at his residence to oversee the works. 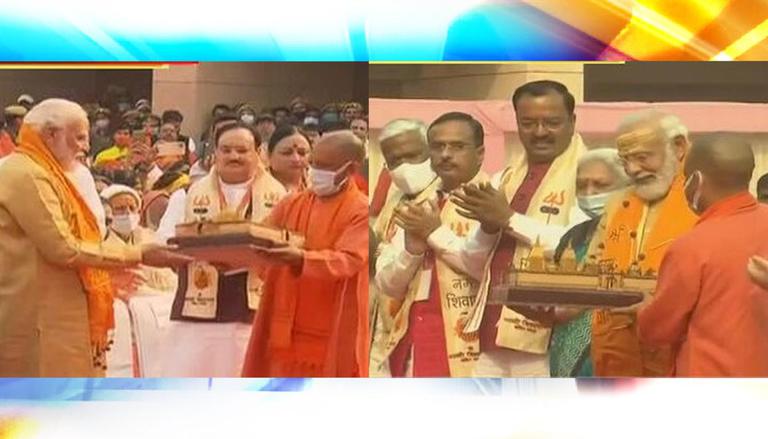 
As Prime Minister Narendra Modi inaugurated the divine Kashi Vishwanath Temple Corridor, several significant moments were witnessed in between including Prime Minister's gestures towards the crowd of Varanasi, felicitation to labourers who contributed to the construction, holy dip at Ganga and several others. Meanwhile, a significant moment was captured when Uttar Pradesh Chief Minister Yogi Adityanath presented a replica of Kashi Vishwanath Dham to the Prime Minister.

During the COVID-19 pandemic, Prime Minister Modi got a 3D model of the Kashi Vishwanath Corridor built at his residence to oversee the ongoing work and kept tabs in numerous virtual ways as well. The Prime Minister gave his personal inputs and suggestions to the architects through video conferencing. Apart from this, a live drone monitoring was also arranged for the Prime Minister to monitor the progress on the holy site as he could not physically visit it.

The inauguration of the corridor carries extreme importance with Kashi is known to be the land of India's spiritual centre. The city is renowned as one of the oldest cities "older than history" as Mark Twain put it. It holds about 23,000 temples, mosques, and synagogues. The corridor will decongest the temple complex which was earlier surrounded by buildings on three sides.

The Prime Minister was welcomed with grand, and warm gestures. PM Modi unveiled phase 1 of the historic Kashi Vishwanath Temple Corridor in the presence of senior BJP leaders, priests, and saints in Varanasi, Uttar Pradesh. The grand ceremony, which was also live-streamed at 51,000 different locations, also marked the presence of UP CM Yogi Adityanath, UP Governor Anandiben Patel, UP deputy CM Keshav Prasad Maurya and BJP president JP Nadda, along with other prominent leaders.

The Shri Kashi Vishwanath Dham project has been flagged off by PM Modi at a special programme in Kashi which will be followed by other functions to celebrate the momentous occasion. As soon as the PM reached Kashi, he offered prayers at the Kaal Bhairav ​​Temple in Varanasi, ahead of the inauguration of the Kashi Vishwanath Corridor.

Later, he along with CM Yogi travelled in a double-decker boat to visit Kashi Vishwanath. He also took a holy dip in River Ganga at Varanasi. After seeking blessings at Ganga for Vishwanath Dham, the Prime Minister reached the Kashi Vishwanath Dham complex where he was welcomed with traditional motions.