Drone cameras hovering around former Andhra Pradesh chief minister N Chandrababu Naidu's Amaravati residence has sparked a huge political slugfest between the ruling YSRCP govt and the TDP. While the TDP has been questioning how can drones fly over a high security zone, the ruling YSRCP govt says it was part of flood surveillance and all necessary permissions were taken.

Drone cameras hovering around former Andhra Pradesh chief minister N Chandrababu Naidu's Amaravati residence have sparked a huge political slugfest between the ruling YSRCP govt and the TDP. While the TDP has been questioning how can drones fly over a high-security zone, the ruling YSRCP govt says it was part of flood surveillance and all necessary permissions were taken.

The house, owned by Naidu's close friend Lingamaneni Ramesh, has been under the scanner ever since the TDP chief moved into the posh bungalow in 2016. The house is located close to River Krishna bank and this, the YSRCP says, violates environmental norms. Officials quote that the house is built within 100 meters from the river in violation of River Conservancy Act. 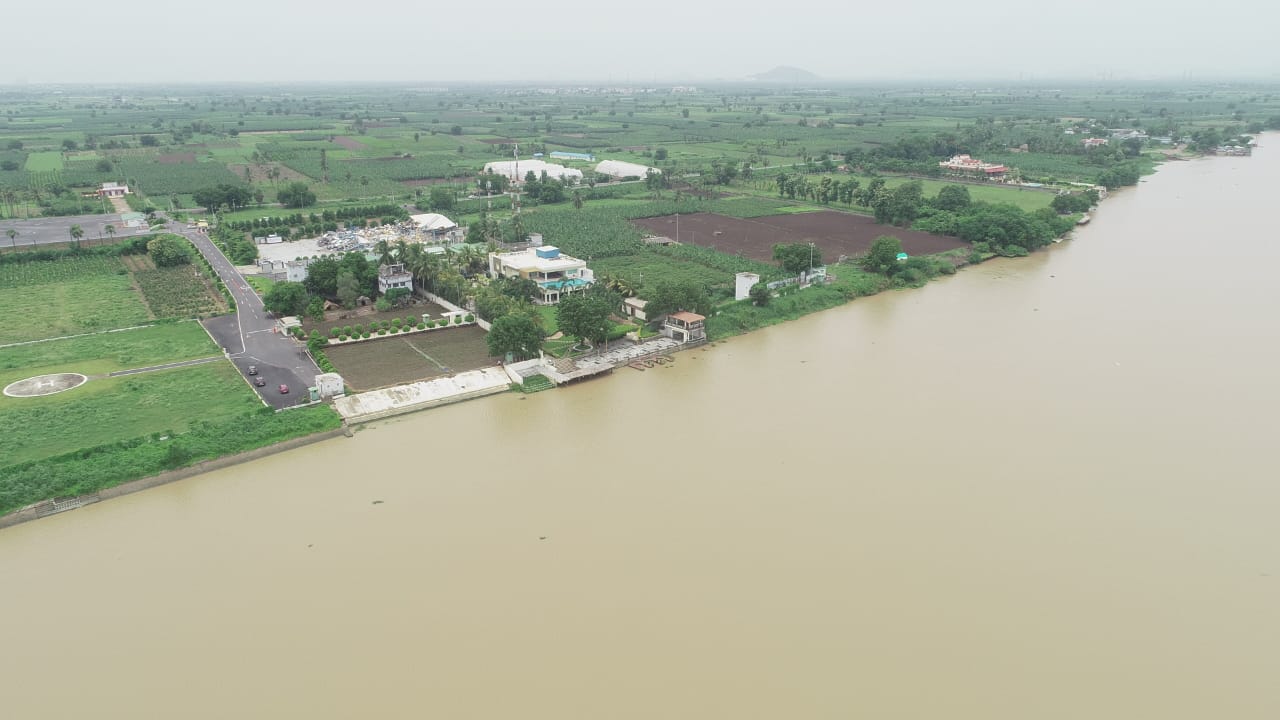 Last week, TDP workers caught two people flying drones outside Naidu's house. When the police detained the two, the accused revealed that they had sought permission from the irrigation department to record water flow along the river bank. The TDP activists staged a dharna outside Naidu's residence for the security breach.

Meanwhile, Irrigation Minister Anil Kumar Yadav called for a press conference to assure that drones were indeed used to assess the flood situation as inflow at the Prakasam Barrage in Vijayawada was raising steadily.

"We have almost rehabilitated everyone, and are also taking precautions in case the the floods situation worsens. As far as the drone is corned which has sparked protest, it is a common phenomenon whereby whenever there is a flood, we make use of the drone system to survey the flood hit zones. Chandrababu Naidu's house happens to fall  in between the flood zone area. I dont know why these TDP people are raising an issue when the survey is being conducted with the prior consent of the Government,"  said Irrigation Minister Anil Kumar Yadav.

The political slugfest went a notch higher when the local tahsildar served notices to Naidu and 31 other residences along the Krishna river bank to vacate the premises immediately in view of rising floodwaters.

Naidu's son and former Andhra Pradesh IT minister Nara Lokesh took offence to this and posted a number of tweets claiming the Andhra Pradesh government is deliberately trying to ensure Naidu is shunted out of his residence. In one of the tweets, Lokesh alleged that boats were deliberately stuck inside the gates of Prakasam Barrage to prevent water from flowing out which will cause flooding upstream where Naidu's house is located.

Naidu's Amaravati residence has been at the centre of controversy ever since the YSRCP govt came to power. In June, Jagan Mohan Reddy held a press conference in Praja Vedika, a meeting hall next to Naidu's residence and ordered for its demolition after the meeting ended. A notice was then served to demolish Naidu's residence too. The TDP claims that the YSRCP is deliberately playing vendetta politics in the state.

PEOPLE HAVE PLEDGED SO FAR
Netflix all set to bring back He-Man and Masters of the Universe with Kevin Smith
PMSC 2019 First Episode Is Here, Features India’s Own Dynamo Gaming, Team SOUL Members And Others, Could This Be India’s Own “Road To Stardom”
Priyanka Chopra & Sophie Turner fangirl over Jonas Brothers on 'Happiness Begins' Tour, groove to the latest songs
Dropped from Delhi school visit, CM Kejriwal opines on Melania's visit to Happiness Class
Left bodies hold anti-Trump rallies in city
Ivanka Trump praises the beauty and grandeur of the Taj Mahal, terms it "awe inspiring"
2 posing as cops, extorting money from commuters held in Ghaziabad
Chartered flight being arranged to bring back Indians on board cruise ship: Embassy
DO NOT MISS
SHAH TO HOLD MEETING WITH KEJRIWAL
KULDEEP SENGAR LOSES ASSEMBY SEAT
DONALD TRUMP AT RASHTRAPATI BHAVAN
AFFIDAVIT IN SC ON DELHI VIOLENCE
VANESSA BRYANT FILES LAWSUIT
FIR REGISTERED AGAINST MNS WORKERS