Wing Commander Abhinandan Varthaman who was held captive in Pakistan after shooting a Pakistan airforce fighter jet  F16, has returned to the cockpit again.

Wing Commander Abhinandan Varthaman, who was held captive in Pakistan after shooting down a Pakistan Air Force fighter jet F-16 during an air fight after the Balakot airstrikes took over the cockpit of MIG-21 again. He was cleared for flying two weeks ago after a thorough medical examination. The plane that took off from the Pathankot airbase for a 30-minute flight on Monday also had co-pilot Air Chief Marshal BS Dhanoa, who also returned to fly after a long time.

Wing Commander Varthaman made news in February this year by downing an F-16, seconds before his MIG-21 was hit by a missile. After he managed to eject of his aircraft, he was held captive by Pakistan. He was returned to India after nearly 60 hours following intense diplomatic pressure exerted by India.

He was conferred the Vir Chakra, the coveted wartime gallantry medal, for downing the F-16 jet of Pakistan during the aerial combat. After he returned to India, he had expressed his wish of returning to the cockpit as soon as possible to IAF top brass.

Indians have shown immense support and appreciation to him for returning to the cockpit within six months. Users have taken to Twitter to encourage the Wing Commander and hailed him. Users also complimented the change in his 'famous moustache', which also became a topic of discussion back in February. He is also being called the face of a tensed military confrontation between India and Pakistan, recalling the way he handled the situation in February. 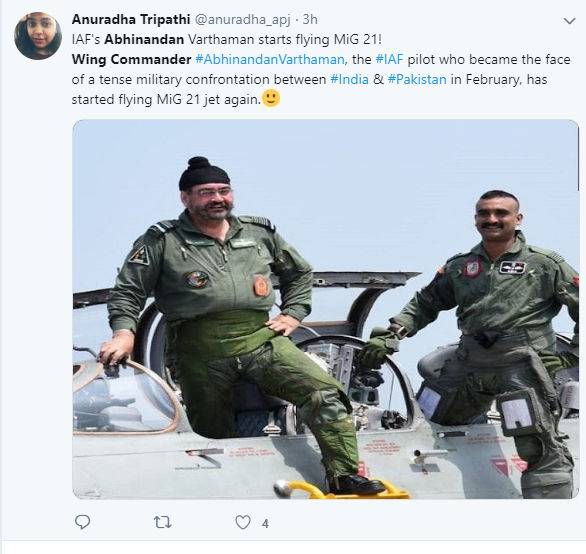 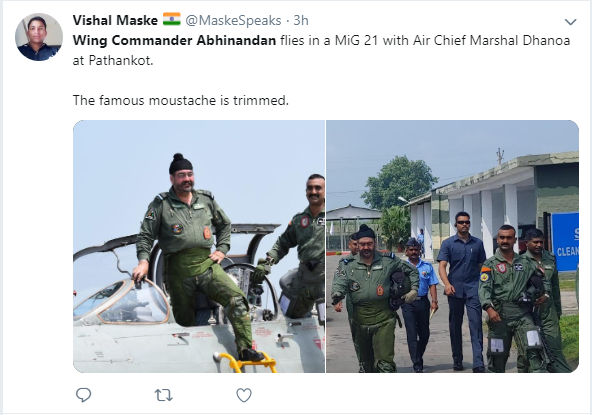 In February, the Wing Commander presented an immense amount of courage when he refused to give any information to the Pakistani authorities even after more than two days of being in Pakistan's custody. He was praised worldwide by politicians, celebrities and fellow IAF personnel for handling difficult situations gracefully.