World's First Robot 'citizen' Sophia In India: Watch What She Did

World's first robot citizen Sophia recently attended the International Round Square Conference in Indore, India. The humanoid artificial intelligence robot which was granted the citizenship of Saudi Arabia in October 2017, addressed the conference which was attended by around a thousand students from 55 countries. Several Indian dignitaries were also a part of the event.

Sophia answered several questions asked by the students about sustainability, robotics, and Artifical Intelligence in her own unique way. In fact, its witty replies often made the crowd laugh. Speaking on stage, Sophia said that it wishes to be with the common people and understand them, as well as be able to express the humankind of emotions.

Watch her full interview above.

Sophia is a social humanoid robot developed by Hong Kong-based company Hanson Robotics. The female robot which was reportedly modeled after actress Audrey Hepburn was first activated on February 14, 2016. She made her first public appearance at South by Southwest Festival (SXSW) in mid-March 2016 in Austin, Texas, United States. The humanoid robot is powered to display more than 50 facial expressions. Its witty responses in several high-profile interviews have made it a global sensation. Sophia is the world's first robot to receive citizenship from a country. Moreover, In November 2017, Sophia became the first non-human to be given any United Nations title after it was named the United Nations Development Programme's first-ever Innovation Champion.

In December 2017, Sophia visited India for the first time. She graced the stage at IIT-Bombay for about 20 minutes where it spoke about the growing intolerance in the world and advised the human race to be "kind" to fellow creatures. During its maiden visit, Sophia was seen dressed in a traditional off-white saree with an orange blouse. Its close features to humans were an absolute treat to watch. 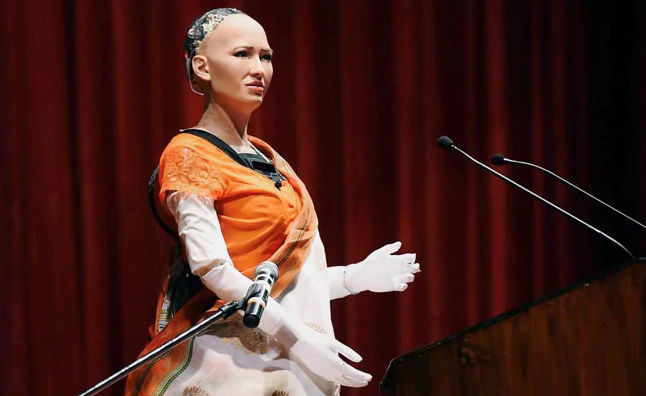 READ | Vikram Lander had hard landing: NASA on its images from moon's surface