The water level in the Yamuna in Delhi receded slightly on Monday but was still above the warning mark of 204.5 metres, as heavy rains continued 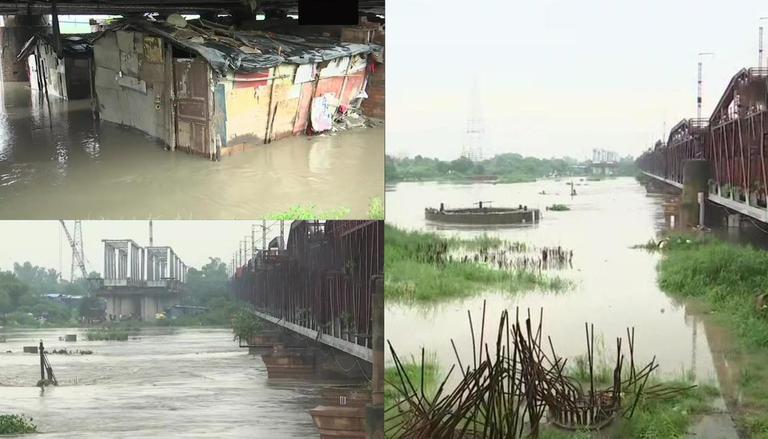 
The administration has directed people residing near the river Yamuna to evacuate the region as the water level crossed the danger mark due to heavy rains. According to the officials, the water level in the Yamuna receded slightly on Monday but was still above the warning mark of 204.5 metres. The flood control room has reported that the water level at the old Railway Bridge was 204.87 metres at 3 pm, a decrease of 0.43 metres, from Sunday.

An official told PTI that families living near the Yamuna river had been moved to safer places till August 1, Sunday. "The water level in the Yamuna is above the dangerous level which has caused waterlogging in their houses and fields. As a precautionary measure, the govt has shifted them to the upper side," Ashu, one of the residents of the Yamuna bank area told the news agency, ANI. The Delhi administration had sounded a flood alert after the river Yamuna swelled to 205.59 metres, breaching the danger mark of 205.33 metres on Friday.

Haryana discharged around 15,000 cusecs water from the Hathnikund Barrage

The administration sounded a red alert after Haryana discharged around 15,000 cusecs of water from the Hathnikund Barrage in Haryana's Yamunanagar district at 3 pm. The authority said that the water discharged from the barrage normally takes two-three days to reach the national capital. The Delhi Disaster Management Authority said that dozens of boats have been deployed to evacuate the families residing near the banks of the river. "Families living in vulnerable areas temporarily moved into tents and shelter homes of the city government," added the Disaster Management officials.

Meanwhile, the India Meteorological Department, a thunderstorm with light to moderate intensity rain would occur over and adjoining areas of isolated places of Delhi, Noida, Greater Noida, Ghaziabad, Bijnor, Muzaffarnagar, Shamli, Barut (Uttar Pradesh), Gurugram, Manesar, Rewari, Bawal, Hodal (Haryana). The weatherman has also sounded an orange alert for moderate rain in Delhi for today. The authority said that it has been keeping a close watch on the weather situation as more rains are expected in the region in the next three to four days.

(With inputs from ANI, PTI)