Central Railway cancels 23 trains to prevent infection during long-distance journeys. Read further to know which all trains have been cancelled.

After the Central Railway announced a hike in the price of railway platform tickets, it has also announced the cancellation of over 80 trains in the country. All railway zones have been advised to hike the platform tickets from Rs 10 to Rs 50 to discourage large social gatherings on railway platforms. Check out the railway stations and where this rule has already been implied here.

Railways have imposed a new decision with regards to safety and sanitation by cancelling over 80 trains throughout the country. Many long-distance passenger trains were cancelled as a preventive measure amidst the COVID-19 scare and non-occupancy of the berths.

While trains running in the Central line and Western line have also seen the effects of train cancellation. 35 trips of 10 Western rail services were also announced for cancellation amid health scare in the country. Central railway and western railway's long-distance journey passenger trains have been observing a surge in ticket cancellations since a while now, and that also amounted for the train cancellation. 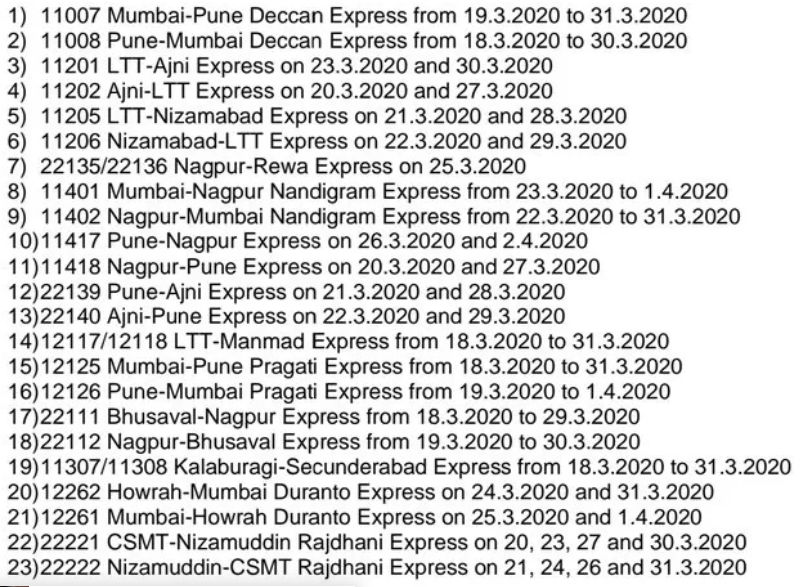 Intensive cleaning of coach fittings to prevent spread of Coronavirus

Central Railway has ordered an intensive cleaning in the coach fittings of the trains on Saturday. From handles, door handles, door latches, entry door handles, seat guard, snack trays, window glass, a window grill, bottle holders, upper berth climbing stair, electrical switches, to charge points, all of these will be cleaned with disinfectants.