Prime Minister Narendra Modi while addressing the nation in his Independence Day speech announced the introduction of 75 Vande Bharat trains in 75 weeks. 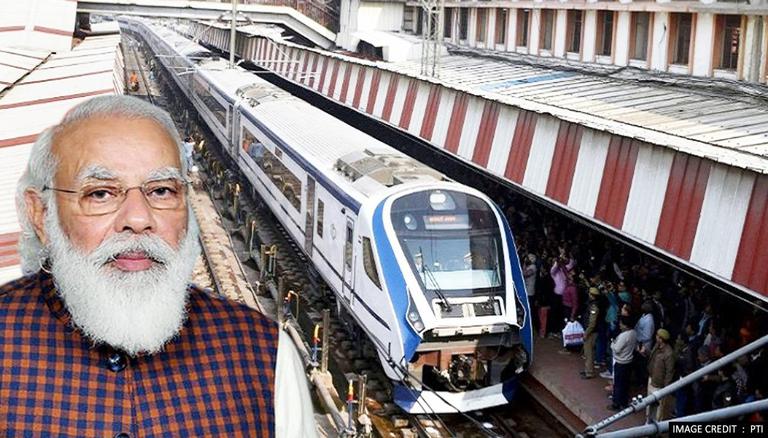 
After Prime Minister Narendra Modi announced the launch of 75 trains, Indian Railways has filed a tender for 58 rakes of Vande Bharat Express trains on August 28, Saturday. According to PM Modi's Independence Day speech, 75 trains will be launched in 75 weeks which will help to connect different parts of the country.

The tender which was filed on August 28, Saturday by Indian Railways, has invited bids for designing, developing, manufacturing, integrating, and testing traction propulsion electrics for the 58 rakes of Vande Bharat trains. On the way to achieve its target by August 15, 2023, it is looking forward to introducing 102 Vande Bharat trains by 2024 including the 58 trains. Earlier, it has already filed a tender for 44 Vande Bharat trains.

According to an official, 75 of these Vande Bharat trains are to be available by August 15, 2023.

Prime Minister Narendra Modi while addressing the nation in his Independence Day speech announced the introduction of 75 Vande Bharat trains in 75 weeks of 'Azadi ka Amrit Mahotsav'. With this launch, the trains will help to connect the different parts of the country.

A meeting took place on August 27, Friday in the presence of PM Modi where the details of the plan were laid out. Later on Saturday, the fresh tender was floated by the railways.

As announced by PM Modi, the next slot of the Vande Bharat trains will have several new facilities including better seating, security and surveillance system, emergency facilities, upgraded amenities, and many more. These coaches will also have a Centralised Coach Monitoring System for the functioning of all the vital systems of the train. One of the most important upgrades will include a push-back arrangement for seats.