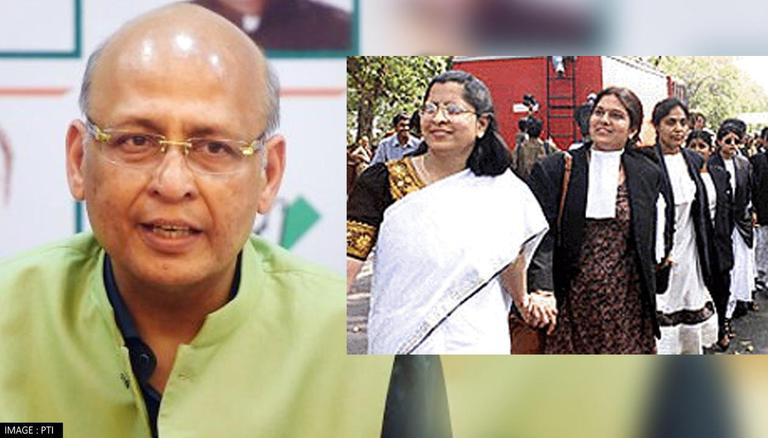 
After CJI Ramana, on September 26, exhorted women jurists and lawyers to come to the fore and fight for a solid 50% representation for women in the Indian judiciary, senior advocate and Congress Rajya Sabha MP Dr Abhishek Manu Singhvi was quick to take to Twitter to appreciate the sentiments of the Chief Justice of India. However, Singhvi placed the onus of equal representation in the justice delivery system on the 'prerogative of the legislature' and said that the judiciary can only be a guide to this process.

Taking to Twitter, Abhishek Manu Singhvi shared, "I appreciate the sentiment with which the current CJI bats for decoloniality of existing laws especially certain provisions of IPC. However, the judiciary can only be a guide to what is the prerogative of the Legislature."

I appreciate the sentiment with which the current CJI bats for decoloniality of existing laws especially certain provisions of IPC. However, the judiciary can only be a guide to what is the prerogative of the Legislature.

Singhvi highlighted that while the judiciary could voice the need for equal representation, it is the lawmakers (Legislature) of the country that can realise the goal 50% reservation for women. He implied that subsequent amendments in statutory provisions in this regard could be brought about only after lawmakers of the country take necessary legislative steps.

This comes after the CJI spoke on the need for the 'Indianisation' of the country's legal system and has even said that Indian laws are not reflective of the apparatus of Indian society. Subsequently, Singhvi affirmed that certain provisions of the Indian Penal Code need 'decoloniality' of relevant and effective statutory provisions.

"Women of the world, unite! You have nothing to lose but your chains": CJI Ramana

On Sunday, CJI Ramana while addressing a felicitation ceremony organised by the Lady Advocates of the Supreme Court, said, "Enough of suppression of thousand of years. It is high time we have 50 per cent reservations for women in the judiciary."

Notably, lawyer Vikas Singh said that as the CJI is the head of legal fraternity & institution and because appointments are declared by the collegium, more women numbers in the legal system can be easily achieved. Further, Singh added that Supreme Court Bar Association (SCBA) has always been asking for larger representation of women in the judiciary and submitted CJI's office a list of Supreme Court women lawyers. The names on the list have been recommended by a search committee of SCBA.

While former Additional Solicitor General of India Pinky Anand has said that the appointment should be on merit, former High Court jurist Ajit Sinha said that the spirit in which the CJI pitched the reservation of women in judiciary is 'great and welcoming'. He said that rather than reservation, more opportunities should be brought in for women. "Merit should be the criteria. Because sole reservation on grounds of gender would be violative of Article 14 and 19 of the Constitution and also against equality," Sinha said.