In the latest development in the cruise drug must probe, the Killa Court on Friday rejected the bail plea of Aryan Khan, Arbaaz Merchant, & Munmun Dhamecha. 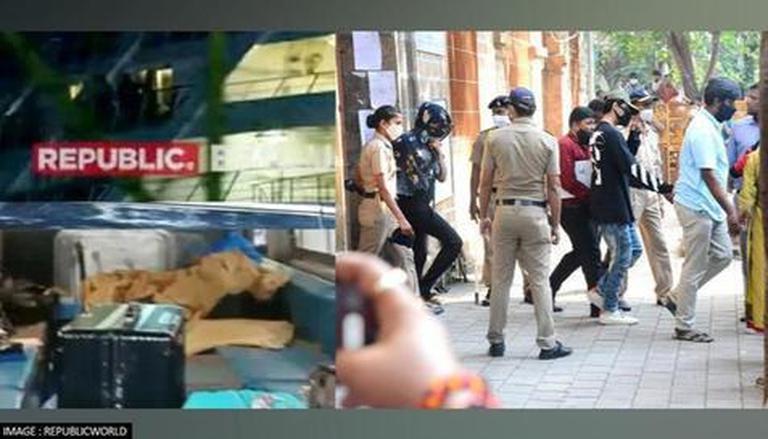 
In the latest development in the Mumbai cruise drug must probe, the Killa Court on Friday rejected the bail plea of Aryan Khan, Arbaaz Merchant, and Munmun Dhamecha as the plea was 'not maintainable'. Citing the bail applications of the eight accused as 'not maintainable', the court directed all the accused to move sessions court for regular bail.

Two women accused, prior to the commencement of the hearing, were sent to Byculla jail while six men accused were sent to the Arthur road jail and will be lodged there until they receive bail from the Sessions court.  The lawyers of the accused have stated that they will file a bail application in the Session court at the earliest.

Minutes of the proceeding

During the hearing of the bail plea, Satish Maneshinde, Aryan Khan's lawyer maintained that nothing has been found in the possession of Aryan Khan. "I thought that NCB and its law officers would know that no materials have been found with me nor in my bag and they let me go on the first day but they didn't," Maeshinde said. The lawyer, stressing for a bail, added, "This interrogation, confrontation can take place even if I am out on bail."

Munmun Dhamecha's lawyer maintained that nothing was recovered from her. "There were three persons in the room, Baldev, Soumya, and Munmun and nothing was recovered from Munmun. The offense against her is involving 5gram, a small quantity, and as far as the nexus is concerned, they failed to prove Munumun's connection with the other persons," he said pleading bail. Arbaaz Merchant's lawyer also pleaded bail, and said,"This court's role is not limited to remanding the accused. The court is supposed to analyze the evidence and the court has the power to even discharge Arbaaz, if no evidence is found."

After hearing the arguments of the lawyers of the accused, ASG Anil Singh who was representing NCB, said "Everyone argued as if we are opposing their right to claim bail. I am opposing the right to claim bail in this court.I again submit that this application either is for regular bail or interim bail is not maintainable before this court." He added, "The question of law is important before the state of law. The accused arrested are triable before the sessions court."

The  Narcotics Control Bureau (NCB) on Saturday busted a high-profile drug party on a cruise ship en route from Mumbai to Goa. The party allegedly involving celebrities, including actor Shah Rukh Khan's son Aryan Khan, was busted by the NCB after an eight-hour-long operation. Cocaine, Hashish, MDMA, and other drugs were recovered, and eight including Aryan Khan were detained.

After a 15-hour-long interrogation, the detainees were put under official arrest. Of the eight, Aryan Khan, Arbaaz Merchant, and Munmun Dhamecha were produced before the Killa court on 7 October and were remanded police custody till 7 October. The other five- Nupur Satija, Ishmeet Singh Chadha, Mohak Jaiswal, Gomit Chopra, and Vikrant Chhokar - were produced before the Court on October 4, and were also sent to police custody till October 7.

Also, on October 6, they arrested one Achit Kumar from Powai, and on October 7, a foreign national from Bandra in follow-up operations. They are yet to be produced before the court. With this, the number of arrests has climbed up to 18.

On October 7, all the accused were produced and were remanded to 14-day judicial custody.