Assam Police Seizes Over 1000 Kgs Of Ganja From Dumper Trucks In Karimganj; 1 Arrested

Over 1000 kgs of ganja were seized by the police on Friday from Assam's Karimganj district along the Assam-Tripura border and one person has been arrested. 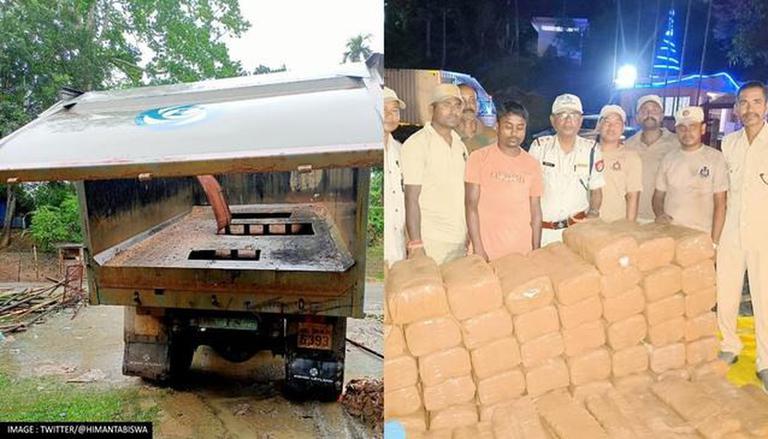 
In another major crackdown on drug smuggling into Assam, over 1000 kgs of ganja were seized by the police on Friday from the Karimganj district along the Assam-Tripura border. The incident took place at the Churaibari area in Karimganj where two dumper trucks arriving from a neighbouring state were held with the ganja consignment.

As informed by the police, both the dumper trucks were coming from Tripura's side, following which, they were stopped by the police team at the Churaibari area along the border.

Niranjan Das, I/C of the Churaibari police Watch Post, informed about the same, further adding that a secret chamber was found inside one dumper truck when searched.

In addition to this, the police have also arrested a person who was the truck driver, identified as Liton Sarkar. While a case has been registered in the matter, further investigation is currently underway.

Tweeting about the same, Assam CM Himanta Biswa Sarma shared pictures of the seizure and lauded the Assam Police's remarkable job. "In a massive catch, Karimganj Police has recovered 1003 kgs Ganja welded inside the body of two dumpers coming from a neighbouring state. One accused has been arrested during the operation. Remarkable job Assam Police, Keep it up!", he tweeted.

In a massive catch, @karimganjpolice has recovered 1003 kgs Ganja welded inside the body of two dumpers coming from a neighbouring state.

One accused has been arrested during the operation.

It is pertinent to note that the Assam government has been busting several drug rackets and stopping drug smuggling for several days now. This incident came just a week after another similar seizure was carried out in the Karimganj district.

Earlier on June 11, the Assam Police seized 1480 kilograms of ganja from a goods carrier and later arrested its driver. The vehicle was also arriving from a neighbouring state into the Churaibari Watch Post in Karimganj.

READ | 4 held with drugs worth Rs 8 lakh in Gujarat