In an important intervention on Sunday, CJI Ramana expressed serious concern over the custodial torture at police stations and called for sensitization. 
In an important intervention on Sunday, Chief Justice of India NV Ramana expressed serious concern over the violation of human rights at police stations. Speaking at the launch of the Legal Services App at the Vigyan Bhawan in Delhi, he lamented that people detained at police stations suffer in the absence of effective legal representation. The mobile App will help the poor and needy people in applying for legal aid and seek victim compensation.

Raising alarm at the third-degree torture allegedly meted out by the police, he called upon the National Legal Services Authority to carry out nationwide sensitization of police officers. Constituted under the Legal Services Authorities Act, the NALSA provides free legal services to the weaker sections of society besides organizing Lok Adalats. According to the CJI, the installation of display boards and outdoor hoardings in every police station is necessary to educate people about the constitutional right to legal aid.

CJI NV Ramana remarked, "The threat to human rights and bodily integrity are the highest in police stations. Custodial torture and other police atrocities are problems which still prevail in our society. Inspite of constitutional declarations and guarantees, lack of effective legal representation at the police stations is a huge detriment to arrested or detained persons. The decisions taken in these early hours will later determine the ability of the accused to defend himself. Going by the recent reports, even the privileged are not spared third-degree treatment." 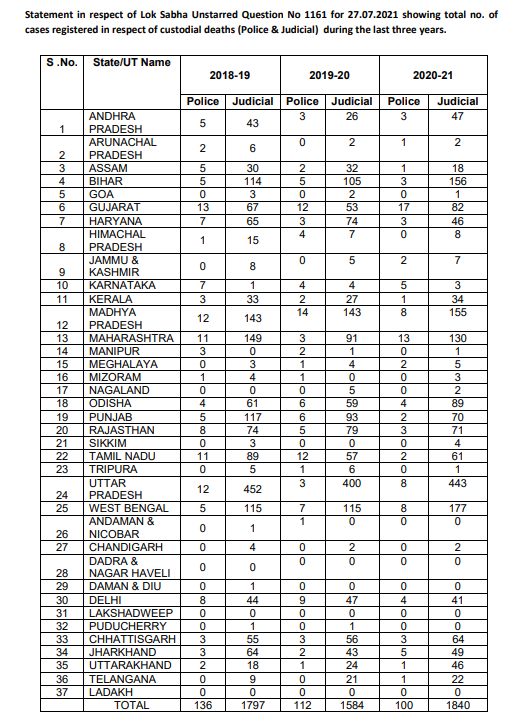 Moreover, the Centre recently sent an advisory to all state governments to ensure the installation of CCTV cameras in every police station. This was in pursuance of a Supreme Court order dated December 2, 2020, which mandated the installation of CCTV cameras in police stations and the offices of all central probe agencies such as CBI, ED, NIA, NCB, DRI and SFIO. In case of a human rights violation complaint, the CCTV footage can be summoned by the Human Rights Commission or the Human Rights Courts.