The Delhi High Court on Saturday has directed the Central Government to undertake the removal of more than 550 former Government employees and 11 former Members of Parliament from their illegally occupied government accommodation. A bench of Chief Justice D N Patel and Justice C Hari Shankar rapped the ministry for not initiating recovery proceedings against the illegal occupants, some of whom have been overstaying for over a decade and have racked up dues of over Rs 95 lakh till date.

The direction had come while hearing a PIL claiming that several official residences for MPs, MLAs and bureaucrats were being allegedly illegally occupied by those who were no longer holding the offices. The high court had on January 17 asked the Centre how many government bungalows were being occupied by people who are no longer MPs, MLAs or bureaucrats and for what duration.

The Court said: "If someone is overstaying in government accommodation, you do not need a five year plan to vacate them. Have you given them notices for recovery of dues? Nearly 600 government accommodations were not vacated. Some are overstaying since 1998. Almost every one of them has to pay dues of lakhs of rupees. Why have (you) not vacated them? Why no notice for recovery issued to them?

The ex-MPs named in the affidavit included former BJP MP and now Congress leader Dr Udit Raj, former TDP MP Murali Mohan Maganti and former BJP MP Manohar Utawal. The court also directed that one-day's salary of the official present in court be deducted as he was not prepared with the facts to answer simple queries of the bench. 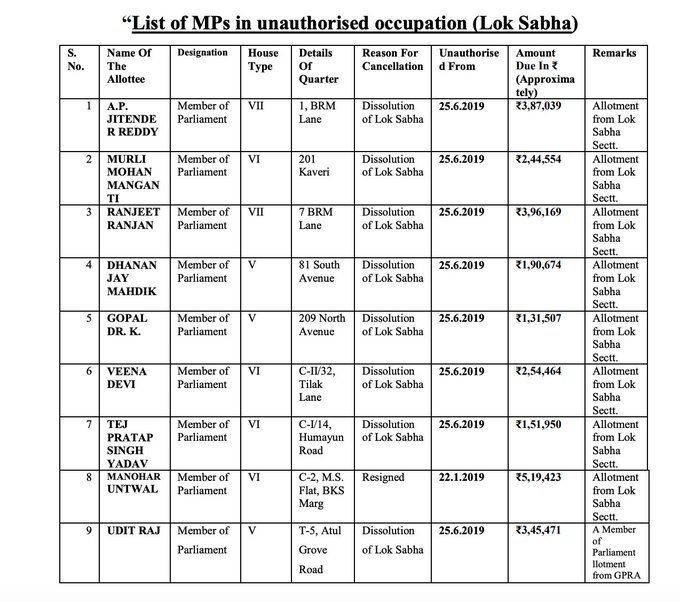 According to the figures in the affidavit, 244 out of the 565 units that were illegally occupied by retired government employees were type-II accommodations. Of the 565 units, some were unauthorisedly occupied since as late as 1998. However, the huge amount of dues -- ranging from a few lakhs to around Rs 95 lakh -- were owed by occupants of type-III, IV and VA accommodations, which together numbered around 200. The court gave two weeks' time to the ministry to file an affidavit indicating whether any recovery notices have been issued and if yes, their status. The bench also directed the ministry to evict within two weeks all those illegal occupants who have not obtained a stay from a court or tribunal against their eviction.