On Tuesday, the Delhi Police arrests 6 persons including BJP leader Ashwini Upadhyay in connection with the anti-Muslim slogans raised at Jantar Mantar. 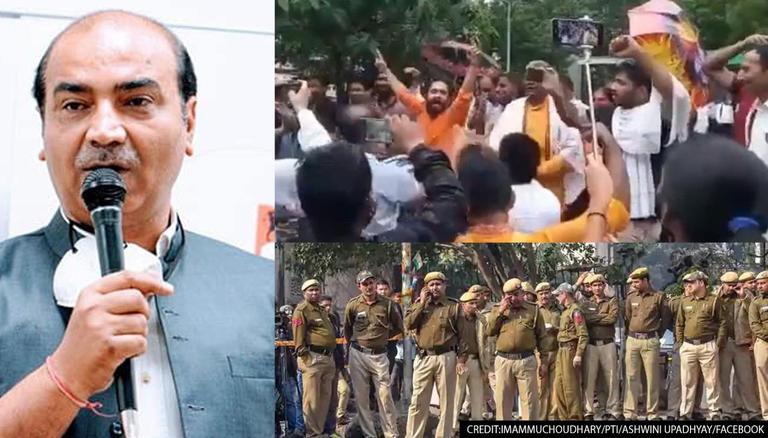 
In a big development on Tuesday, the Delhi Police arrested 6 persons including BJP leader Ashwini Upadhyay in connection with the anti-Muslim slogans raised at Jantar Mantar. The police had registered an FIR against unknown persons after taking cognizance of the multiple videos going viral on social media in this regard. IPC Sections 153A (Promoting enmity between different groups on grounds of religion, race, place of birth, residence, language, etc., and doing acts prejudicial to maintenance of harmony) and 188 (disobedience to order duly promulgated by a public servant) have been slapped against the accused- Upadhyay, Vinod Sharma, Deepak Singh, Vinit Kranti, Preet Singh, and Deepak.

The incendiary slogans were allegedly shouted at the event organized by the Bharat Jodo Andolan near Parliament in the national capital on Sunday, August 8. The protesters called upon the Centre to repeal colonial-era laws before the 75th Independence Day in 2022. Confirming that the protest was held under Upadhyay's leadership, Bharat Jodo Andolan media in-charge Shipra Srivastava told the media, “The protest was held against colonial laws and demanding to abolish 222 British laws. We have seen the video, but have no idea who they are. The police should take strict action against the persons who raised the slogans".

Meanwhile, the BJP leader said, "I have lodged a complaint with the Delhi Police to probe the viral video. If this video is true, then take strict action. I don't know the persons seen in this video. I have neither met nor seen them before. I did not invite them. They were not seen till I was there. If such a video is shot after we left, then this is a ploy to tarnish this agitation. If this video is fake, then it is clear that propaganda is being spread to tarnish us and the Bharat Jodo Andolan."

According to the senior advocate, the event lasted from 11 am to noon featuring speeches by RVS Mani, Firoz Bakht Ahmed, Lt Gen (Retd) Vishnu Kant Chaturvedi and Gajendra Chauhan. Condemning this incident, AIMIM supremo Asaduddin Owaisi wrote on Monday, "It is such a joke to demand justice and legal action in the current atmosphere. There should be a discussion on this in the Lok Sabha today and the Union Home Minister should be held accountable".

WE RECOMMEND
BJP issues whip to its Rajya Sabha MPs; asks them to be present in House on Aug 10 & 11
BJP got 8 times of Congress' income from electoral bonds in 2019-20; complete EC data here
Union Minister Danve rules out replacing Maharashtra BJP chief ahead of local body polls
Congress organises 'BJP gaddi chhodo' march in UP
Karnataka minister threatens violence if BJP cadre attacked; 'our strength has gone up'