Four persons were arrested and taken to custody by the Malkangiri district police after being involved in betting on Indian Premier League cricket matches. 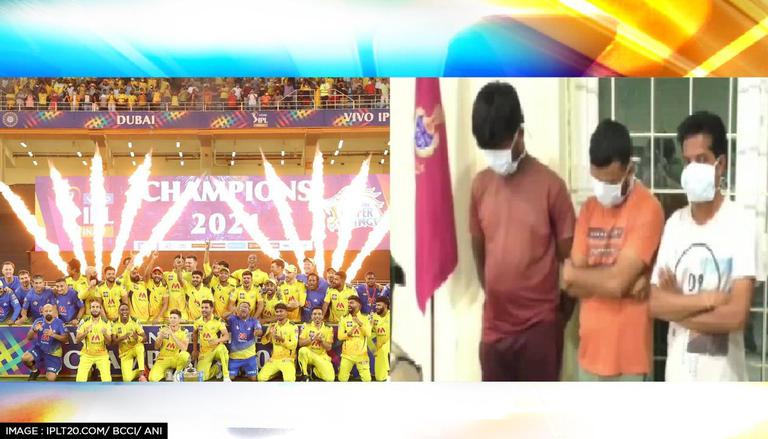 
The Malkangiri district police busted a racket that was involved in betting on Indian Premier League (IPL) cricket matches. The police said that four persons involved in the racket have been arrested. The bust was reported after the police conducted raids in different places of the bookies in Odisha based on a tip-off.

The police conducted searches in various parts of the district before busting the racket in connection to IPL betting. The police also seized Rs 9 lakh in cash and bank account having Rs 18 lakh from their possession. “We arrested four bookies involved in IPL betting and we have seized cash of Rs 9 lakhs and bank accounts having Rs 18 lakhs,” Malkangiri SDPO Abhilash said.

SDPO Abhilash further informed that the Malkangiri police received information that a few people are luring individuals to play bet on IPL matches and looting them. “We conducted a raid on the matter and searched the different places of the bookies respectively. During the search, we have also recovered their bank account details, mobile phones and debit cards,” Abhilash said. The SDPO also informed that the bookies were conducting transactions offline as well as online. He informed that the arrested will be presented before the court soon.

Earlier in September, five people were arrested for allegedly accepting bets on IPL 2021 cricket matches. Dharmendra Sargayya, Sub Inspector, Tilak Nagar Police Station, Indore had said that five bookies were arrested after they bet on the matches of IPL sides Punjab Kings and Sunrisers Hyderabad, Rajasthan Royals and Delhi Capitals. The police recovered Rs 2,500, twenty mobile phones, one laptop, and other communication equipment worth Rs 2.50 lakh from their possession, according to Sub Inspector Sargayya.

READ | Suryakumar Yadav 'emotional' ahead of big IPL 2022 auction; 'Hopeful to be back for MI'

In a similar case, the Vasco Police Station in South Goa broke a betting racket and apprehended six suspects. Officials informed that one of the six suspects was from Rajasthan, and the others were from Nagpur. The police also informed that the gang had been engaging in this illicit activity since 19 September 2021.