During a SC hearing on the anti-encroachment drive, Kapil Sibal had suggested that the NDMC was targeting only one community whose buildings were being razed. 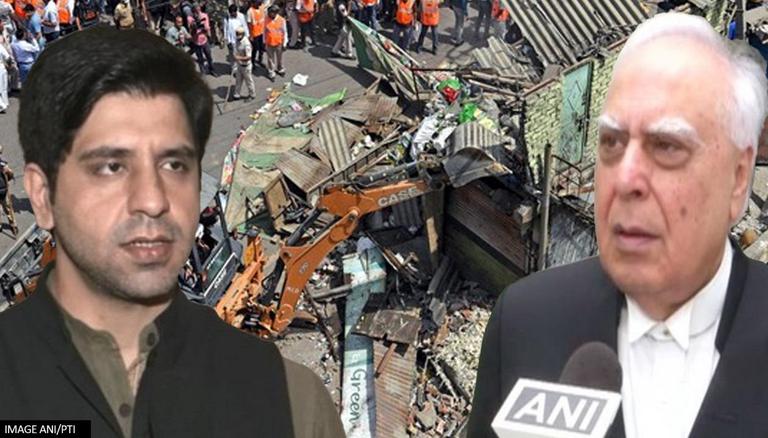 
BJP spokesperson Shehzad Poonawala lambasted senior advocate and Congress leader Kapil Sibal for 'peddling lies' that only one community was targetted in the demolition drive carried out in Delhi's Jahangirpuri on Wednesday.

During a hearing in the Supreme Court on the NDMC's anti-encroachment drive, Sibal claimed that the civic body was associating only one community with encroachment and their properties were being demolished. To this, Justice Rao asked whether no other community suffered a loss in Wednesday's demolition drive.

Reacting to the observations, Poonawala accused the Congress leader of peddling lies in court. "The blatant communal spin being given by Congress and Sibal despite the fact that Gupta juice center, Jha Pan shop, and other illegal encroachments near the Mandir were also demolished," he tweeted.

He further accused the grand old party of dividing the nation into communal groups, first by raising the hijab controversy in Karnataka schools and now by giving communal colour to the anti-encroachment action in Jahangirpuri.

The narrative being peddled in court ! Blatant communal spin being given by Congress & Sibal despite the FACT that Gupta juice centre , Jha Pan shop & other illegal encroachments near the Mandir were also demolished !

Then divided Indians into Hindu Muslim

A bench of the SC comprising Justices L Nageswara Rao and BR Gavai was hearing a bunch of pleas challenging the anti-encroachment drive that took place in Jahangirpuri on April 20.

As the proceedings began in the apex court today, senior advocate Kapil Sibal, who was appearing for the Jamiat Ulama-I-Hind, alleged that people from one community were gated and their houses were demolished during the drive. Condemning the NDMC action, he said the process was meant to instil fear and sideline the rule of law.

"You can't connect encroachments to one community! Encroachments aren’t limited to A and B communities. You can't just demolish houses saying they encroach. This forum is to show that rule of law prevails," he submitted in the Supreme Court.

To this, Solicitor General Tushar Mehta, appearing for the Centre, countered the allegations stating that in Khargone, where similar violent clashes were reported on Ram Navami, 88 affected parties belonged to the other community. The SG also quashed claims that notices were not issued to the residents before their properties were razed. He said notice was not required to demolish stalls, chairs, tables etc.

"I will show you instances when notice is not required and illegal structures were given the notice. Traders had moved HC last year and HC had itself ordered demolition".

Thereafter, the Supreme Court directed that the status quo will be maintained; i.e the stay on the demolition drive will continue for two weeks until the matter is taken up for hearing.