In a massive development, the SIT probing the Lakhimpur violence concluded that it was a "pre-planned conspiracy" by Ashish Mishra and other accused persons. 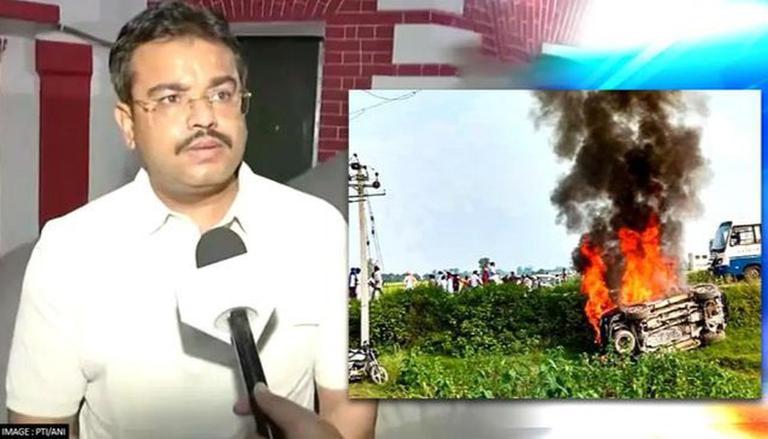 
In a massive development, the SIT probing the Lakhimpur violence concluded that it was a "pre-planned conspiracy" by Ashish Mishra and other accused. Filing an application before the Chief Judicial Magistrate, SIT officer Vidyaram Diwakar demanded that the accused persons should be charged under Sections 307 (attempt to murder), 326(voluntarily causing grievous hurt by dangerous weapons or means) and 34 (acts done by several persons in furtherance of common intention) and Arms Act sections instead of Sections 279 (negligent driving), 304A (culpable homicide not amounting to murder) and 338 (causing grievous hurt by act endangering life or personal safety of others). They have also been booked under Sections 147,148,149,302 and 120B.

Speaking to the media on this development, farmers' lawyer Mohammad Aman opined, "When the FIR had come to the fore, it was categorized as a case of rash driving. This is what Ashish Mishra's side was saying. But after the completion of the probe by the SIT and the recording of the statements of eyewitnesses, it is clear that they called goons from outside with complete planning and killed farmers with complete planning."

At present, Ashish Mishra and his co-accused Lavkush, Ashish Pandey, Shekhar Bharti, Ankit Das, Latif, Shishupal, Nandan Singh, Satyam Tripathi, Sumit Jaiswal, Dharmendra Bajara, Rinku Rana and Ullas Kumar Trivedi are in judicial custody. This development assumes significance at a juncture when both Samyukta Kisan Morcha and the opposition have demanded the ouster of Ashish Mishra's father Ajay Mishra who is serving as the Union MoS Home. Already, the rifle of Ashish Mishra, Ankit Das's pistol and Latif's repeater gun have been seized and undergone a ballistic examination.

Here is the application filed by the UP SIT: 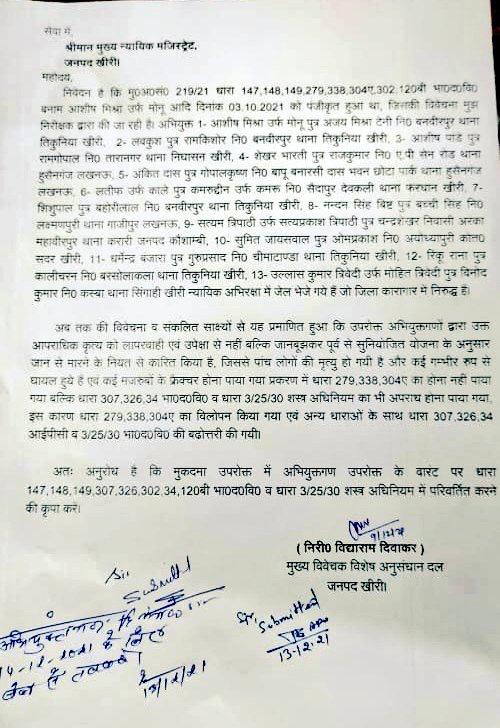 Violence broke out in Uttar Pradesh's Lakhimpur Kheri district on 3 October leading to the death of 8 persons including 4 farmers.  Immediately after the horrific incident, UP CM Yogi Adityanath promised that the state government will expose the elements involved in the incident and take strict action against them. Apart from an SIT, the Uttar Pradesh government constituted a single-member Commission of Inquiry of Justice (retd.) Pradeep Kumar Srivastava to probe the Lakhimpur violence. Moreover, the police formed a 9-member monitoring committee led by DIG (Headquarters) Upendra Agrawal in connection with this case.

On 17 November, an SC bench comprising CJI NV Ramana, Justices Surya Kant and Hima Kohli appointed retired Punjab and Haryana High Court judge Rakesh Kumar Jain to monitor the investigation into the Lakhimpur violence. The apex court observed that this will help ensure "transparency, fairness and absolute impartiality" in the investigation. It also reconstituted the SIT formed by the Yogi Adityanath-led government by including three IPS officers- SB Shirodkar, Deepinder Singh and Padmaja Chauhan in the panel.