District Judge SB Bahalkar granted bail to 89 persons accused in the Palghar mob lynching case on a surety of Rs.15,000 each. 115 accused are out on bail. 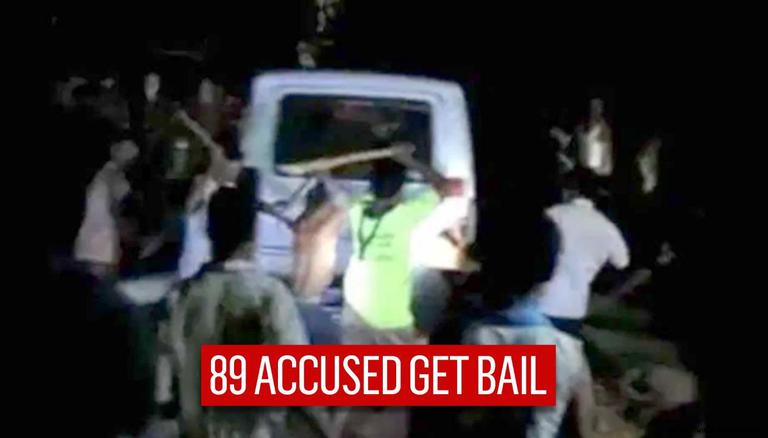 On Saturday, District Judge SB Bahalkar granted bail to 89 persons accused in the Palghar mob lynching case on a surety of Rs.15,000 each. On January 6, Special Public Prosecutor Satish Maneshinde informed the court hearing the bail pleas that the aforesaid persons had no active role to play in the crime despite being present on the spot. Overall, 115 out of the 246 accused persons in the case are out on bail. A three-judge bench of the SC comprising Justices Ashok Bhushan, R Subhash Reddy and MR Shah is expected to hear the petitions seeking a CBI or NIA probe into the mob lynching case in the month of January.

The Maharashtra Police has already filed an affidavit before the SC detailing the punishment meted out to 18 police personnel found negligent in preventing the crime. While Assistant Police Inspector Anandrao Kale has been dismissed from service, Assistant Police Sub-inspector Ravindra Salunkhe and Police Head Constable Naresh Dondi have been compulsorily retired. The remaining 15 personnel have been punished by reducing their pay for a specific period. Meanwhile, two charge sheets have been filed by the police before a court in Dahanu against the accused persons.

Palghar mob lynching case: A Thane court grants bail to 89 people arrested in the case. on a surety of Rs 15,000 each. These 89 people were granted bail on the grounds that they were simply present at the spot, at the time of the incident.

What is the Palghar mob lynching case?

The shocking incident took place on the night of April 16, 2020, in the Palghar district of Maharashtra when two ascetics Mahant Kalpavruksha Giri and Sushilgiri Maharaj were travelling in a vehicle driven by Nilesh Yelgade to Gujarat for attending a funeral. The aforesaid three individuals were lynched by a mob who allegedly suspected them to be child kidnappers after they reached Gadchinchale village in Dahanu taluka. Reportedly, a group of 4 policemen reached the spot after the Kasa Police Station received phone calls.

Their attempts to pacify the mob turned futile as the mob overturned the vehicle. Later, another police contingent arrived on the scene and managed to make the three individuals sit in two separate police cars. Thereafter, the crowd attacked the police vehicles, resulting in some police personnel sustaining injuries. However, some videos emerged which show police personnel standing mutely even as the mob was attacking the three persons. This came in for a lot of criticism from leaders across the political spectrum.