Pulling up the BJP govt in Tripura, the Supreme Court bench led by Justice DY Chandrachud on Tuesday, suggested deployment of additional forces in some areas 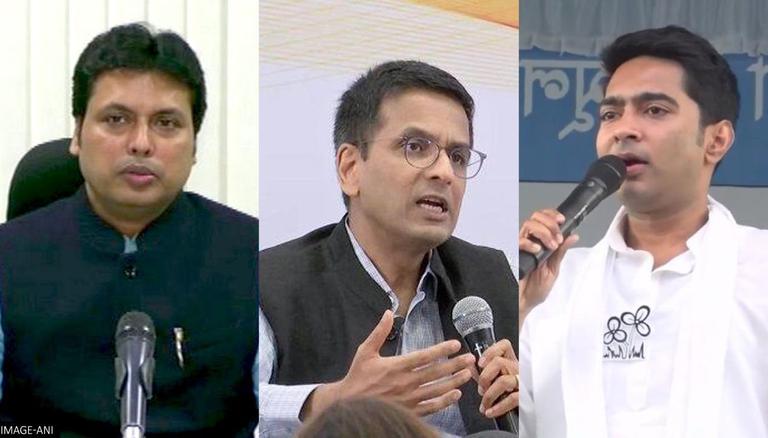 
Pulling up the BJP govt in Tripura, the Supreme Court bench led by Justice DY Chandrachud on Tuesday, suggested the deployment of additional paramilitary forces in critical areas to manage law & order situation. Hearing a plea filed by Trinamool Congress against the Biplab Deb govt amid ongoing attacks on TMC leaders, journalists and activists, the apex court has asked the Tripura govt to file details of the security arrangements made by it. TMC has alleged that the state police were not acting on any of the complaints filed by TMC against BJP leaders. The hearing has now been adjourned to 3:30 PM.

Lashing out at BJP, advocate Jaideep Gupta who was arguing for TMC, claimed, "Police are not doing anything and goons and attackers are wearing helmets. The main grievance is incidents are happening and arrests are not happening. The confidence in the parties is so low that the CPI(M) has withdrawn the candidature of its members".

In response, senior advocate Mahesh Jethmalani representing the state govt, said, "Every incident that had been mentioned has an FIR, but in some cases, there may be no arrests as the offences are not serious. No offence is punishable for more than 5 years". Briefing on the security arrangements, he added, "For security, there is Tripura State Rifles and the armed police personnel. Additional deployment is between the state police and the Election Commission".

READ | TMC's Saayoni Ghosh granted bail after arrest in Tripura, party says 'BJP was after her'

In a bid to allay security fears, Justice Chandrachud suggested, "Is it possible for the state govt to requisite the battalion of the paramilitary forces for additional security in these critical areas? Adding central paramilitary forces will level some confidence". Tackling TMC's allegation against BJP MLA Surajit Datta for exhorting people to commit violence, SC has asked the state govt to brief the court on it.

Last week, the SC bench ordered the Tripura government to ensure that no political party is prevented from pursuing its electoral rights in accordance with law, and from campaigning in a peaceful and orderly manner, in upcoming local polls. The court also ordered the Tripura govt to file an affidavit explaining the steps being taken to ensure the same. Polls to 13 Municipal Councils and six Nagar Panchayats are scheduled on November 25.

On Sunday, Tripura Police detained TMC Youth VP Saayoni Ghosh after a complaint by a BJP worker that she was causing a disturbance while an election rally of Chief Minister Biplab Kumar Deb was being held. The Police detained her for questioning and was kept in custody for more than 24 hours, after which she was granted bail. At least 19 people were injured as supporters of BJP and TMC clashed in Teliamura in Tripura's Khowai district, following which prohibitory orders under Section 144 of the CrPC were imposed in the area.  TMC has been eyeing to make inroads into Tripura yet again since the return of veteran Mukul Roy and the inclusion of Sushmita Dev. Tripura goes to polls in 2023.