AAP MP Sanjay Singh & RJD's Manoj Jha on Tuesday, lashed out at the Centre for stating that 'no COVID deaths due to oxygen shortage', demanded govt's apology 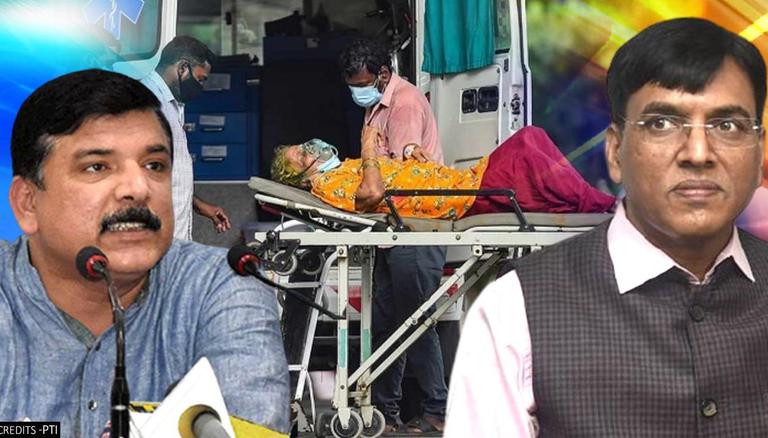 
Lamenting at the deaths during the second COVID wave, AAP Rajya Sabha MP Sanjay Singh on Tuesday, lashed out at the Centre for stating that 'no COVID deaths due to oxygen shortage'. Citing the example of a woman who unsuccessfully tried to resuscitate her dying husband on the way to a hospital, he said that the government had mocked lakhs of deceased in the Rajya Sabha. Terming the government a killer, he demanded that the government apologize for those deaths.

AAP: 'Mockery of lakhs of deaths'

Similarly, RJD MP Manoj kumar Jha slammed the Centre's insensititvity towards the victims. In an emotional speech in the Rajya Sabha he said, "We remember how the nation spent those 1.5 months as a nightmare. Some members of this House barely escaped death and came here. One of 37-year-old student died before I could arrange a bed. Understand the individual's pain instead of blaming each other, then we can find a solution to this. We have witnessed undignified deaths at that time, if we don't set this right, future generations will not forgive us".

Govt: 'No deaths due to oxygen supply'

In a written reply, the Ministry of Health informed the Rajya Sabha that the states and union territories have not recorded any death due to the oxygen crisis during the second COVID wave. Stating that the demand for medical oxygen surged from 3,095 MT to 9,000 MT in comparison to the first wave, the Centre stated that it had to step in and facilitate the equal distribution of medical oxygen. Denying any mention of deaths due to lack of oxygen reported by states and UTs, the Centre revealed that a total of 4,02,517 oxygen cylinders distributed to the states, 237 of the 1,222 PSA Oxygen generation plants have been commissioned while 295 PSA plants are being installed by different ministries.

"Accordingly, all states and UTs report cases and deaths to the Union Health Ministry on a regular basis. However, no deaths due to lack of oxygen have been specifically reported by states and UTs. due to unprecedented surge in demand of medical oxygen during the second wave – the demand in the country peaked to nearly 9000 MT as compared to 3095 MT during the first wave – the central government had to step in to facilitate equitable distribution to the states," stated the Centre.

In the second COVID wave, India grappled with acute oxygen supply with Delhi being hit the worst - several hospitals moved the High Court seeking oxygen supply. While the Centre and Delhi govt blamed each other for the ongoing oxygen crisis in the national capital, Railways started 'Oxygen Express'  to transport liquid oxygen to the states via green corridors. Delhi, which increased its demand to 900 MT oxygen per day has been allotted only 480 MT by Centre. SC then ordered the Centre to maintain a daily supply of 700 MT to Delhi and constituted an 11-member panel to decide on oxygen allocation to states. Recently, Centre announced a COVID-19 relief package of Rs 23,123 crores for improvement in the health infrastructure - with Rs.15,000 crore as Centre's share and Rs.8,123 crore as state's share.