Even as J&K held a fruitful Real Estate Summit, former CMs Omar Abdullah and Mehbooba Mufti cast aspersions over the intentions of the Union government. 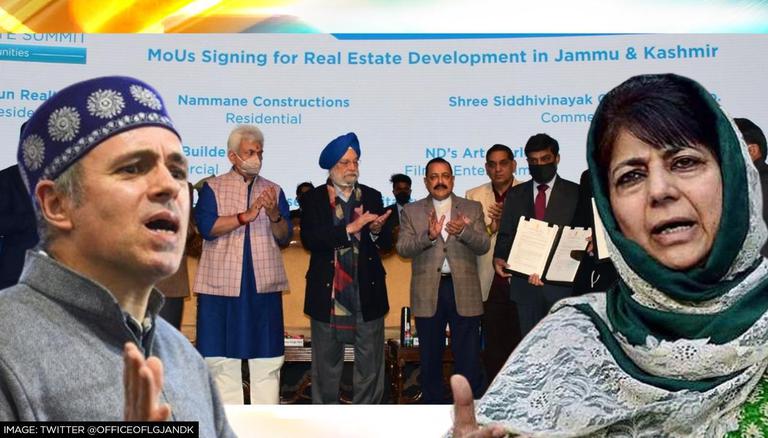 
Even as J&K held a fruitful Real Estate Summit, former CMs Omar Abdullah and Mehbooba Mufti cast aspersions over the intentions of the Union government. Taking to Twitter on Monday, the NC vice-president claimed that the "identity" of the people of the Union Territory itself was up for sale. On similar lines, PDP supremo Mehbooba Mufti alleged that the sole motive of the revocation of J&K's special status was to change the demography of the region.

Incidentally, Lieutenant Governor Manoj Sinha had rubbished this contention during the summit terming it as an "effort to create fear and incite people". In a veiled dig at opposition parties such as NC and PDP, he stressed, "Some people don't want that there should be facilities in Jammu and Kashmir akin to other Indian cities. They will blame a fall in job creation. They want multi-storeyed buildings to come up without people acquiring land. They want industries to come up without giving land for industry. There has been an attempt to mislead people. I want to say with complete honesty that the root of unemployment is this".

On this occasion, 39 MoUs worth Rs.18,300 crore were signed for the development of housing and commercial projects in J&K. Dubbing this as a major step towards the transformation of the Union Territory, Sinha stated that this will help generate direct and indirect employment opportunities. He also revealed that the government had identified 6000 acres of land for projects besides framing rules of change of land use of agricultural land.

A Presidential notification combined with requisite legislation passed by both the House of Parliament in August 2019 led to Article 370 becoming virtually redundant. This implied that the special status of Jammu and Kashmir (J&K) was scrapped. Furthermore, the region was bifurcated into the Union Territories of J&K and Ladakh. Thereafter, restrictions on the movement of people and communication were imposed in the state, which was gradually lifted over the months. Through an order on October 26, 2020, the MHA amended 14 laws of the erstwhile state of J&K and repealed 12 other laws altogether.

Most importantly, laws governing the ownership, sale and purchase of land such as The J&K Development Act, 1970, The J&K Land Revenue Act, 1996, The Agrarian Reforms Act, 1976 and The J&K Land Grants Act, 1960 were also amended. For instance, the phrase 'permanent resident of the state' in the J&K Development Act was removed thereby permitting any person from India to purchase land in J&K. Additionally, The Jammu and Kashmir Alienation of Land Act, 1938, and The Big Landed Estates Abolition Act, 1950 which prohibited the transfer of land to non-permanent residents were abolished.