Responding to the summon issued by CBI in connection with coal scam, TMC MP Abhishek Banerjee's wife, Rujira Banerjee said that she is ready to join the probe.

Responding to the summons issued by the Central Bureau of Investigation (CBI) in connection with a case of coal pilferage and in West Bengal, Rujira Banerjee, wife of TMC MP and West Bengal Chief Minister Mamata Banerjee's nephew Abhishek Banerjee said on Monday that she is ready to join the probe.

In a letter addressed to the central agency, Rujira asked the CBI to visit her residence between 11 am and 3 pm on Tuesday. She, however, stated that she is unaware of the reason behind her summons or the subject matter of the investigation.

“Though I am unaware of the reason for me being called for questioning or the subject matter of the investigation, you may visit my residence as per your convenience between 11 am and 3 pm tomorrow, i.e. 23 February 2021,” she said in her letter. 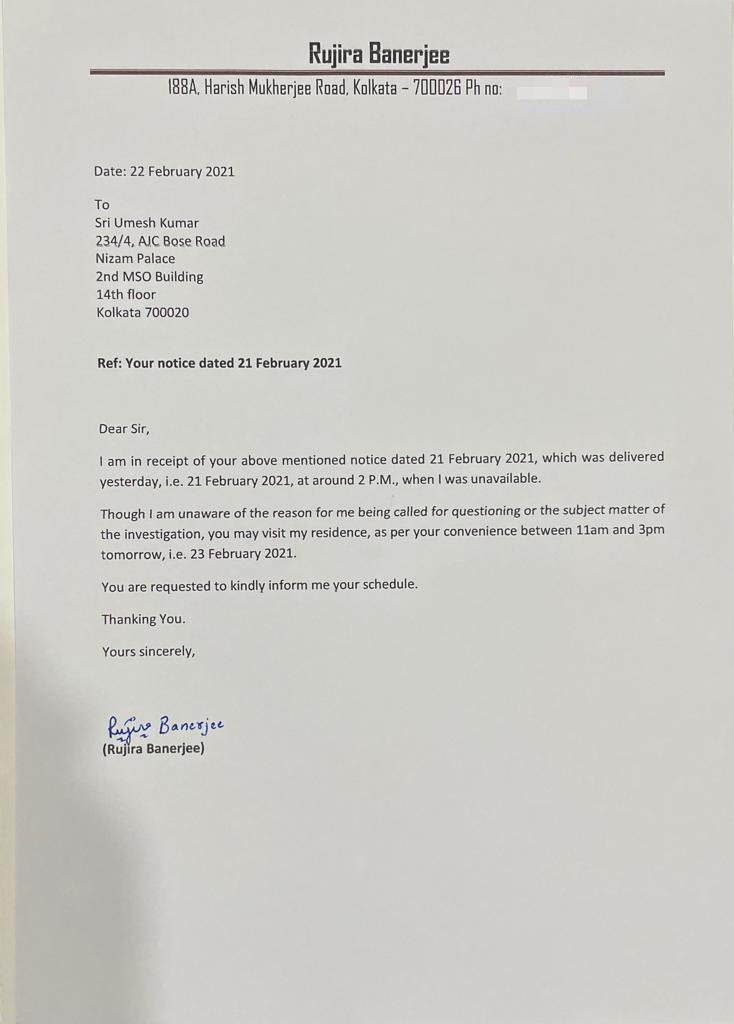 'Won't be cowed down by CBI'

On Sunday afternoon, Kolkata CBI officers arrived at Abhishek Banerjee's residence with a notice, asking for his wife to join the probe into the alleged coal scam. Referring to the summon, the Diamond Harbour MP said, "if they think they can use these ploys to intimidate us, they are mistaken. We are not the ones who would ever be cowed down."

At 2pm today, the CBI served a notice in the name of my wife. We have full faith in the law of the land. However, if they think they can use these ploys to intimidate us, they are mistaken. We are not the ones who would ever be cowed down. pic.twitter.com/U0YB6SC5b8

Reacting to the development, Union Minister (MoS) Babul Supriyo claimed, "I have unmasked these names long back. Now central agencies like CBI, ED has enough proof against the accused. Every common man of West Bengal knows who is the captain of all the scams - be it coal-cow smuggling, etc. CBI has raided the right person - if you pull the ear, the head will follow."

BJP has alleged that the money from the coal sales is whitewashed through shell companies and siphoned into the funds of the ruling party. The BJP had also alleged that the main beneficiary of the scam is Abhishek Banerjee.

Previously, Naroola was pulled up by MHA for allegedly making false representations and concealing material facts while submitting documents before the authorities to get her OCI and PAN card. She was also stopped at Kolkata Airport by customs for a 2kg gold seizure.

'Bengal Taught Me How To Fight Like A Tiger': Mamata Slams CBI's Notice To Abhishek's Wife