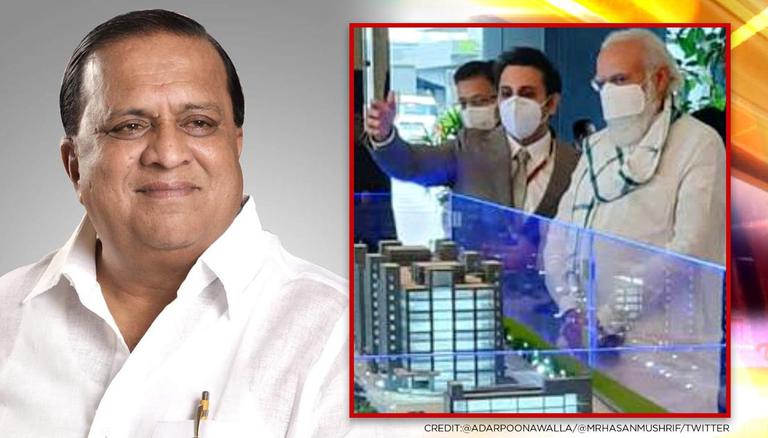 
Sparking a new row over the politics surrounding the COVID-19 vaccines, NCP leader and Maharashtra's Rural Development Minister Hasan Mushrif on Sunday accused the Central Government of castigating Serum Institute of India CEO Adar Poonawalla for promising the Maharashtra Government of supplying 1.5 crore doses of Covishield. Mushrif alleged that Adar Poonawalla left the country and flew to London out of fear due to the Centre's pressure. He made no mention of the practices allegedly followed by his own peers, who are in court and in various cases attempting to defend exactly this kind of charge.

While speaking at an event in Ahmednagar, he alleged although without any evidence, that the Centre was threatening the vaccine manufacturers who were ready to supply to state governments despite the Centre asking the states to procure vaccines independently.

'Adar Poonawalla was reprimanded by Centre'

"When Maharashtra announced that we will conduct free vaccination for all above 18 years of age, we floated global tenders but no vaccine company responded. Serum Institute of India, whose CEO is Adar Poonawalla and the main owner is Cyrus Poonawalla - Sharad Pawar’s classmate, had promised to supply 1.5 crore vaccines for Maharashtra from June onwards. However, the next day itself he was reprimanded by the Central government so he left for London and is not ready to come back now, Mushrif alleged.

Adar Poonawalla last month spoke about the pressures he was going through over the production of COVID-19 vaccines to meet the ever-increasing demand in India as the country was grappling with the devastating second wave of the Coronavirus pandemic. Poonawalla also spoke about receiving "aggressive phone calls" from some of the most powerful people in the country, demanding Covishield supplies. He further mentioned that the pressure of aggressive calls was the reason for him flying to London along with his wife and children. However, he also indicated that his move to travel to London was also linked to his business plans to expand vaccine manufacturing to locations outside India which also includes the United Kingdom. The Poonawalla family is in London for over a month with Cyrus Poonawalla calling the trip to London a routine visit which his family does every year, according to reports.

However, Adar Poonawalla has been given Y category security from the Centre in view of the threat perception amid the pandemic. The Central Reserve Police Force (CRPF) will provide this security cover to Poonawalla with armed commandos to accompany him every time he travels to any part of the country, according to the government officials.

The security was given after Serum Institute's director of government and regulatory affairs Prakash Kumar Singh wrote to Union Home Minister Amit Shah on April 16 requesting security cover. Singh also talked about the threats that Poonawalla had received from various groups over supplies of the Covishield.