After the 'Har Ghar Tiranga' bike rally was flagged off by Vice President Venkaiah Naidu from Red Fort, the Opposition cried foul on Wednesday. 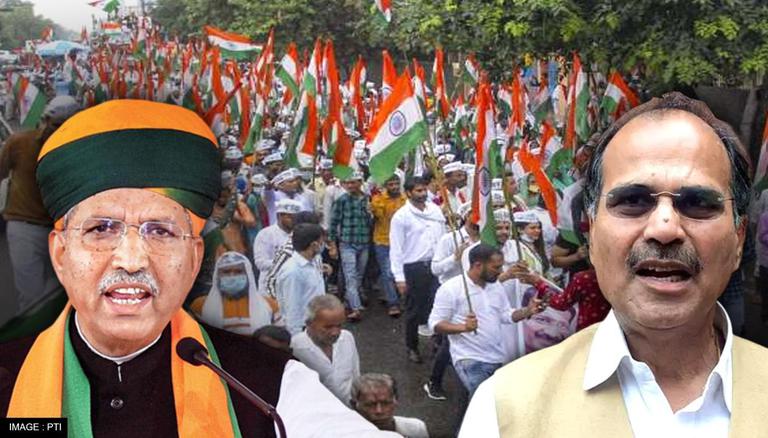 
After the 'Har Ghar Tiranga' bike rally was flagged off by Vice President Venkaiah Naidu from Red Fort, the Opposition cried foul on Wednesday. Speaking to the media, Congress' Adhir Ranjan Chowdhury claimed that he was 'not invited' to the event that sought to heighten the sense of patriotism with Tiranga all over the streets, as the country celebrates Azadi Ka Amrit Mahotsav. Chowdhury claimed that the Tiranga, which he called symbolic of Mahatma Gandhi and freedom, was initially 'not accepted' by the Bharatiya Janata Party and accused the saffron party of 'now playing politics' over it.

The Minister of State for Culture, Arjun Ram Meghwal came forward to counter Congress' claim. Outlining that Azadi Ka Amrit Mahotsav was not a governmental event but a national event, Meghwal said, "It is going to be 75 years of India's freedom. Every Indian hoist the Tiranga between 13-15 August, for that, we are holding promotional events, like the one held today. To every Parliamentarian, I personally sent e-mails and made calls to join."

Chowdhury attacked Prime Minister Narendra Modi, and the government at the Centre, asking them not to teach patriotism to Congress. "They snatched all the love and respect of India by importing the Tiranga from China," The Congress leader further said, talking to the reporters.

READ | 'Tiranga is symbol of nation for all: HM Amit Shah at event to honour tricolour designer

Arjun Ram Meghwal countering the same, said, "We have not imported any flags from China. The allegation is completely false and baseless."

The 'Har Ghar Tiranga' bike rally came a day after the Ministry of Culture hosted a mega 'Tiranga Utsav' event on Tuesday to mark the Azadi ka Amrit Mahotsav.