Chaired by supremo Sharad Pawar, the meeting had many party leaders in attendance, physically as well as through video conferencing. 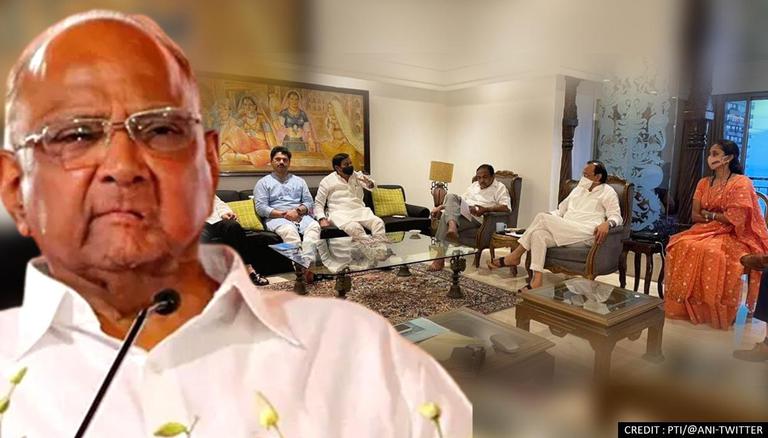 
Amid speculation regarding internal friction within the MVA alliance in Maharashtra, the Nationalist Congress Party (NCP) held a meeting on Tuesday. Chaired by party supremo Sharad Pawar, the meeting had many party leaders in attendance, physically as well as through video conferencing, like Deputy Chief Minister of Maharashtra Ajit Pawar, and leaders like Supriya Sule and Chhagan Bhujbal. The meeting holds relevance at a time when there is so much going on, on the part of one of the major partners in the Maha Vikas Aghadi which is ruling Maharashtra, including the money laundering case running against former state Home Minister and senior leader of the party Anil Deshmukh.

Ajit Pawar, who while making his way out after the meeting addressed the media, said, "Anil Deshmukh is being targetted through ED though he is fully complying with the procedures." Earlier, Sharad Pawar had also addressed the matter and somehow pulled up the BJP-led Central government, which he had claimed was behind the entire Anil Deshmukh-ED case, seemingly glossing over the fact that it was former Mumbai CP Param Bir Singh who had levelled the allegations, and a police officer re-appointed by his government who is currently in jail for having allegedly planted gelatin sticks in a car near Mukesh Ambani's residence and for allegedly also being involved in the murder of the owner of that car. However, claiming that the BJP-led government at the Centre has started this 'new trend' of threatening with agencies like the ED and the CBI, he had affirmed that he and his party members are 'not scared'.

It is pertinent to mention here that earlier in the day, Anil Deshmukh had declined to physically appear before the Enforcement Directorate citing the risk of contracting COVID-19.

'It was a preparatory meeting ahead of the assembly session': Ajit Pawar

Talking about the meeting, Ajit Pawar asserted that it was a 'preparatory meeting' ahead of the assembly session. As per sources, in the meeting, the current political situation was discussed, and the party leaders were directed to put up a united front, and not speak out of turn in public.

There were also reports that suggested that NCP supremo Sharad Pawar had gone to meet Chief Minister of Uddhav Thackeray at his official residence Varsha. Cabinet minister Jeetendra Awhad, Home Minister Dilip Walse Patil and Aditya Thackeray were also said to be attending the meeting – the first between the two leaders after a very public row with the Congress and rumours that Shiv Sena is considering a patch-up with the BJP, its ally of 35 years.

Confirming the news of the meeting between the two leaders, Ajit Pawar said, "The meeting was to discuss BDD Chawl issue because our policemen are also residents there."

Also, there are questions if today's NCP meet had anything to do with the all-Opposition party meet called by Sharad Pawar last week, under the name of Rashtra Manch, which apparently discussed the formation of an alternative vision that as per the leaders, India needed. Shiv Sena did not attend this meet.