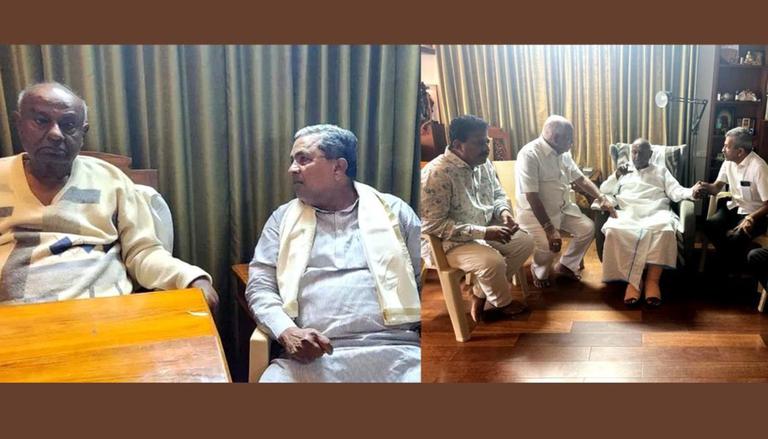 
After Congress leader Siddaramaiah, BS Yediyurappa from the Bharatiya Janata Party (BJP) paid a visit to former Prime Minister and Janata Dal-Secular leader HD Deve Gowda on Tuesday. 90-year-old, Deve Gowda has not been keeping well in the past few days, and his Padmanabhanagar residence is seeing numerous visitors, mostly from the political front, to ask about his well-being. The two former Chief Ministers were among the recent leaders to visit him.

In the visuals accessed by Republic Media Network on Tuesday, the former Prime Minister can be seen sitting on a recliner talking to Yediyurappa. It has a striking resemblance to the visuals from Monday, in which Deve Gowda was seen talking to Siddaramaiah, seated in front of what seemed like the same background.

While the BJP leader is yet to issue a statement about the meeting, the Congress leader had said, "He (Gowda) is a senior politician in the country and in the State too. I had come to inquire about his health. We are in different parties, party politics are different, humanity is different and it is important.”

Siddaramaiah and Deve Gowda were known as political bete-noires since 2006, when Siddaramaiah quit as Deputy Chief Minister and subsequently joined the Congress, after being expelled from the JD(S). However, the hung verdict in the 2018 Assembly elections had forced both the stalwarts to swallow their pride and join hands to fight for survival, resulting in the formation of the Congress-JD(S) coalition government in the State under the leadership of Gowda’s son H D Kumaraswamy.

However, due to internal squabbles, the coalition government collapsed in 2019, which paved way for the formation of the BJP government in Karnataka. Yediyurappa was elected the Chief Minister of the state- a post he held till 2021 until Bavaraj Bommai took over.