After UP, MP & Haryana, Uttarakhand CM Says Agniveers Will Get Priority In State Govt Jobs

Uttarakhand CM Pushkar Singh Dhami lauded the Agnipath scheme and announced that the state government will give priority to Agniveers in many service sectors. 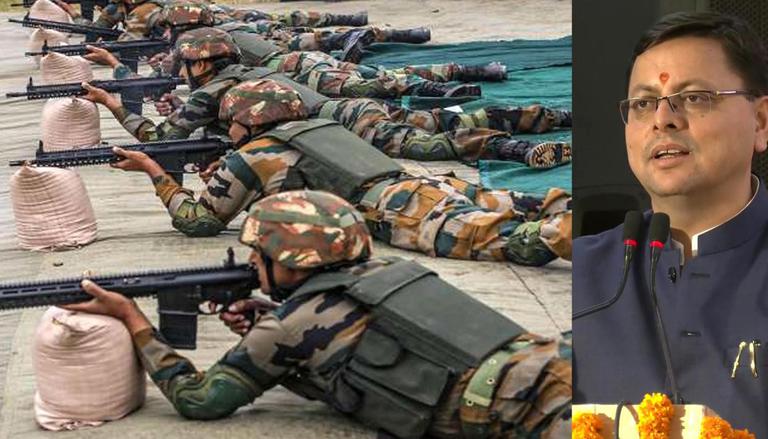 
Uttarakhand Chief Minister Pushkar Singh Dhami lauded the Agnipath scheme and announced the state government will give priority to Agniveers in many service sectors. Defence Minister Rajnath Singh on June 14 launched the Agnipath scheme for recruiting soldiers (Agniveers) for the three wings of the Indian armed forces under which youngsters in the age bracket from 17.5 to 21 years can apply. The selected candidates will serve in the armed forces for 4 years and continue subject to the performance in the subsequent tests. The new scheme is being promoted as being transformative as it will not only reduce the average age of the soldiers and also bring-in fresh talent but it will also plough back the talent into the society after they complete four years in service.

Addressing a press conference, Chief Minister Pushkar Singh Dhami said, "Uttarakhand's contribution to the Army is known to all. The history of the Indian Army is filled with the valorous stories of our brave soldiers. Some of the brave soldiers from Uttarakhand are serving in the Indian Army. Therefore, we have decided that after the service of 'Mother Bharti' under the Agneepath scheme, the state government will give priority to the Agniveers in many services including Uttarakhand Police Disaster Management, Char Dham Yatra Management, the rules regarding this will be decided soon."

CM Dhami further stated that Uttarakhand will continue to strive in the direction of providing employment opportunities to the youth in the state and is also committed to their all-round development.

MP, UP, Haryana to provide jobs to Agniveers on priority

After the announcement of the Agnipath scheme by the Central government on June 14, Uttar Pradesh, Madhya Pradesh, and Haryana also announced they would provide jobs to Agniveers on priority after they complete their four years of service in the armed forces.

Moreover, Home Minister Amit Shah also made an announcement the Agniveers will be given preference for the positions in Paramilitary forces and Assam Rifles. It is pertinent to note that the newly announced Agnipath scheme will govern the recruitment of personnel below officer rank (PBOR) in the Indian armed forces. The recruits, to be known as Agniveers, will form a distinct rank in the tri-services for four years.

Defence Minister Rajnath Singh launched the Agnipath scheme on June 14, thereby also unveiling a new recruiting model under which the youth will serve the armed forces for four years and subsequently they can work as volunteers though only 25% of the recruits will be inducted into permanent commission and will be further required to serve for a period of 15 years.

Through this recruitment, nearly 50,000 people will be selected, and the recruitment procedure will go up by 5,000 every year.