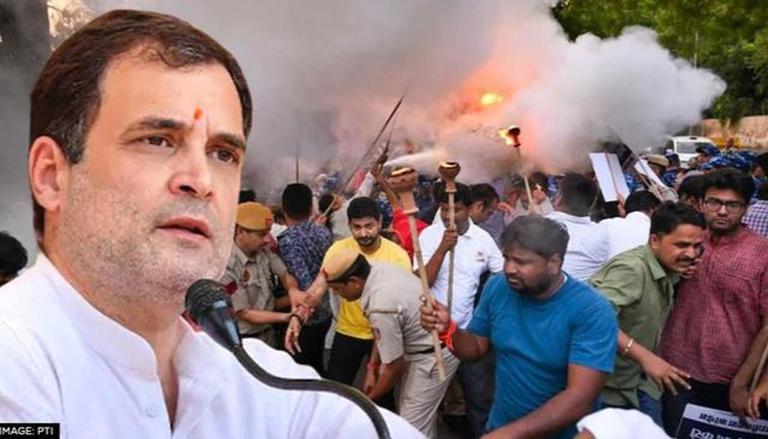 
After BJP general secretary Kailash Vijayvargiya said that Agniveers could be appointed as security personnel at BJP offices, former Congress President Rahul Gandhi lambasted the saffron party stating that young people have the zeal to join the army not to become 'watchman'.

Questioning the silence of Prime Minister Narendra Modi on the BJP's leader's comment, the Wayanad MP said that those who did not hoist the Indian flag for 52 years of independence cannot be expected to respect the soldiers.

"Those who did not hoist the Tricolour for 52 years of independence cannot be expected to respect the soldiers. The youth have the zeal to join the army, not to protect the BJP offices by becoming a watchman, but to protect the country. The silence of the Prime Minister is a stamp on this humiliation," Rahul Gandhi tweeted.

Vijayvargiya on June 19 desired to defend the Centre's Agnipath scheme, which is facing stiff opposition from various quarters, saying that if he has to appoint security officials at his party office, he would give preference to those who have served as Agniveers.

His remarks received strong criticism, including from his party colleague MP Varun Gandhi and Delhi Chief Minister Arvind Kejriwal. The Madhya Pradesh Congress has also demanded an apology from the BJP for "insulting" the defence forces.

Earlier in the day, BJP had hit out at the Opposition, including Congress, for politicising the Agnipath scheme. The saffron party's national spokesperson Sambit Patra also acccused Congress of instigating the youth.

"The kind of brazen statements that are coming from the Congress party is appalling. Priyanka Gandhi has been instigating the youth to dethrone the government. They do not have any sympathy or vision for the youth, they want to use the young blood to work against the government. I am sure that the youth of the country will pass this test. Armed forces are not an issue to be politicised," he said.

No rollback of 'Agnipath' scheme; 'No place for vandalism'

Ruling out the rollback of the 'Agnipath' military recruitment scheme despite widespread protests, the three services of the military on June 19 said that youths who were involved in arson and violence will not be able to join the tri-forces as police verification will be carried out before enrolling anyone.

To a question on whether the government was reviewing or rolling back the scheme because of the protests, Lt General Puri said, "No, why should there be a rollback?"

Lt. General Puri said that a total of 83 recruitment rallies will be conducted across the country to select around 40,000 personnel.