AAP leader Atishi Marlena, who was recently declared the party’s candidate in the 2019 Lok Sabha election from East Delhi constituency, has dropped her last name ‘Marlena’.

The Aam Aadmi Party leader Atishi Marlena, who was recently declared the party’s candidate in the 2019 Lok Sabha election from East Delhi constituency, has dropped her last name ‘Marlena’. Atishi’s Twitter handle has changed from @Atishimarlena to @AtishiAAP and her name has also been amended on the AAP website. However, there are allegations that her party forced her to do so.

Clearing the air, AAP leader Akshay Marathe took to Twitter and denied the allegations of asking Atishi to change her surname. 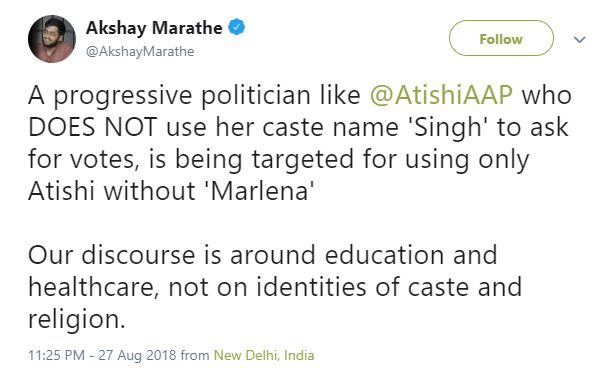 Another AAP leader informed that Marlena is not her real surname and that Atishi's father Vijay Singh had come up with the name by combining 'Marx' and 'Lenin'. However, Atishi has not commented on the name change.

Earlier, Atishi Marlena, a former adviser to Education Minister Manish Sisodia, was selected as the AAP candidate for the Lok Sabha election in the East Delhi constituency. She became the first candidate to be announced by AAP for the 2019 elections and will be operating out of the newly inaugurated office.

Taking the stage on the occasion, Atishi Marlena said," For the past 15- 20 years both BJP and Congress have neglected East Delhi. only AAP has brought development".

The Chief Minister of Delhi, Arvind Kejriwal, also asserted that the Aam Aadmi Party (AAP) will win all seven seats in Delhi in the upcoming Lok Sabha elections. Kick-starting the AAP's campaign for the general elections at the launch of party's new office near Laxmi Nagar Metro Station, Arvind Kejriwal said:

“AAP will win all the seven seats in the 2019 election... Our government in the state has worked for the people. Is there anything that the Lok Sabha members have done for the people in over four years?”

However, the sounding of the poll bugle comes at a time when there appears to have been some amount of instability among the top ranks of the Aam Aadmi Party. Just in August, two stalwart public faces of the AAP, Ashutosh and Ashish Khetan, expressed their desire to leave the Kejriwal-led party, with Khetan managing to do so, even as Ashutosh's resignation was seemingly rejected. As per sources, Khetan may be holding negotiations with the Congress for a Lok Sabha ticket, though he has claimed to have dismissed such an offer from the Aam Aadmi Party and stated his intention of building his career in the legal profession.

The Aam Aadmi Party had swept to power with an overwhelming 67 seats out of 70 in the 2015 Delhi Assembly elections less than a year after Arvind Kejriwal had cut short his first spell as Delhi CM to contest the 2014 General Elections, in which he lost to Narendra Modi in Varanasi. The BJP had won seven out of seven Lok Sabha seats in Delhi, meaning that the Congress doesn't have a single elected MP or MLA in a Delhi seat.