Akhil Gogoi, First Ever MLA To Take Oath While A Prisoner, Alleges Manhandling In Assembly 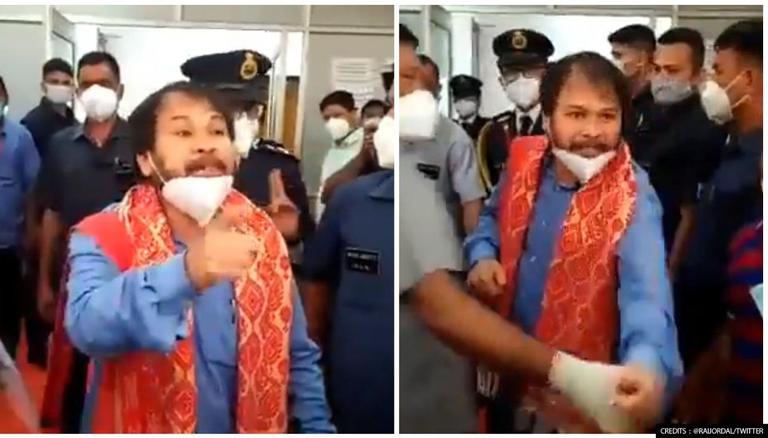 
Jailed activist & Assam MLA Akhil Gogoi alleged that he was manhandled while he arrived at the state Assembly to take oath on Friday after taking special permission from the courts. The jailed activist, who won the Assam Assembly elections from Sivasagar constituency after defeating the BJP candidate Surabhi Rajkonwari, is the state's first politician to win an election without campaigning (as he was in jail) and also became the first MLA to take an oath as a prisoner. As per reports, Akhil Gogoi was pushed around by the security personnel upon his arrival at the Assam Assembly from Gauhati Medical College and Hospital (GMCH) where he was undergoing treatment.

"I am an MLA of this Assembly. How can you push and drag an MLA? This is an insult ... No one can silence my voice," he shouted while being pushed inside the Assembly building.

It is learnt that Akhil Gogoi, later on, apprised CM Himanta Biswa Sarma of the incident who directed the Parliamentary Affairs Minister Pijush Hazarika to look into the matter. Akhil Gogoi took oath in the name of honesty and sincerity, instead of in the name of God. Later talking exclusively to PTI sitting at the opposition MLA's lounge, the Raijor Dal chief said I will raise the same old questions about the welfare of Assam and its people, this time in front of the chief minister, ruling and opposition MLAs," he added.

"CAA, flood havoc, COVID-19 situation, universal vaccination, big dams -- these are some issues which I will raise in the House," Akhil Gogoi said.

The National Investigation Agency (NIA) had arrested him in December 2019 for his alleged role in violent anti- Citizenship Amendment Act (CAA) protests across the state. Akhil Gogoi was admitted at Gauhati Medical College and Hospital (GMCH) in 2020 for treating COVID-19 and he remains there for other ailments. Though the Gauhati High Court upheld a bail order of Gogoi by a Special NIA Court, he is still in judicial custody as he was rejected bail in another case related to anti-CAA violence and is being investigated by the NIA.

The 15-year tenure of Tarun Gogoi as the Chief Minister of Assam came to an end in the 2016 Assembly polls with BJP winning 86 seats as against 26 seats won by Congress. In a blow for BJP in the lead-up to the 2021 Assembly election, its ally Bodoland People's Front (BPF) decided to join the Congress-led alliance. While BJP is contested 92 seats, it allocated 26 and 8 seats to Asom Gana Parishad and the United People's Party Liberal respectively. On the other hand, Congress has formed a grand alliance with BPF, AGM, AIUDF, CPI, CPI(M), CPI(ML), RJD and JPP.

READ | Ahead of Assam polls, Akhil Gogoi alleges NIA promised him bail if he joined BJP, RSS
READ | Akhil Gogoi allowed to take oath as MLA in Assam Assembly complex amid incarceration
First Published: 21st May, 2021 22:31 IST
SUBSCRIBE TO US