In an unforeseen development on Monday, Maharashtra Home Minister Anil Deshmukh tendered his resignation to Chief Minister Uddhav Thackeray, Deshmukh's party NCP informed. Deshmukh purportedly offered to resign by himself, at a meeting of NCP top brass chaired by party supremo Sharad Pawar. This comes right on the back of the Bombay HC ordering a CBI preliminary inquiry into former Mumbai CP Param Bir Singh's charges against Deshmukh, on which petitioner Jaishree Patil had filed a complaint.

In his resignation letter, Anil Deshmukh writes, "The Bombay High Court in its order dated April 5, 2021, has directed the CBI to investigate the allegations against me. At this moment, I feel it is not morally correct to continue to serve as the Home Minister of Maharashtra, therefore I have decided to step down from the position," said Anil Deshmukh in his letter of resignation to CM Thackeray. 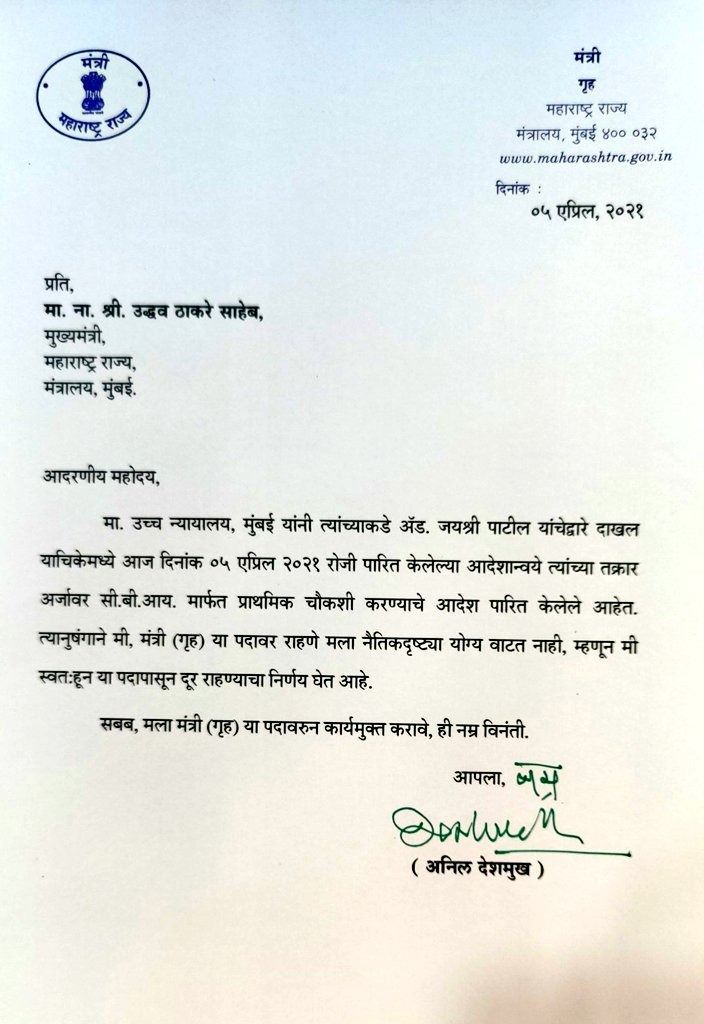 Addressing the media after the court's order in response to a petition filed by Jaishree Patil on former Mumbai CP Param Bir Singh, Fadnavis said, "Now, since the HC has ordered probe we demand the immediate resignation of Maharashtra HM Anil Deshmukh till the inquiry is on. If he is not willing to resign, the Chief Minister should remove him."

Fadnavis said the CBI inquiry would expose and stop the 'Maha Vasooli' pattern of the MVA Govt. BJP leader Kirit Somaiya also expressed satisfaction with the court's order, claiming that a high-level investigation would expose the list of 'beneficiaries' among the Maharashtra cabinet.

An embattled NCP huddled for a meeting to discuss the Bombay HC's order which directed a CBI inquiry into the charges against Deshmukh. According to sources, a meeting was held between NCP leaders Sharad Pawar, Anil Deshmukh, Ajit Pawar, and Supriya Sule on Monday, following the recent development, and it was in it that Deshmukh offered to resign.

On the other hand, Shiv Sena spokesperson Sanjay Raut has declined to comment on the High Court order, saying that an official statement will be made from the government itself. "Someone from the Government will officially speak about the event, I am not a part of the Maharashtra government. Senior leaders like CM Uddhav Thackeray and Sharad Pawar will take a decision," Raut told the media. It indeed came to pass as NCP's Nawab Malik made the announcement on Anil Deshmukh's resignation.

Earlier in the day, the Bombay High Court directed the Central Bureau of Investigation (CBI) to conduct a preliminary inquiry within 15 days against the Maharashtra home minister, based on Param Bir Singh's allegations. Pronouncing its order on Monday, the court noted that directions are required to order an unbiased probe to unearth the truth. The CBI will decide on further course of action after the preliminary probe.

Anil Deshmukh has come under fire from the Opposition ever since former Mumbai CP Param Bir Singh levelled extortion charges against the Home Minister. Up till the high court order, the NCP had been defending its minister against the allegations. The Maharashtra government had even appointed a one-member panel, comprising a retired Bombay HC judge Kailash Chandiwal, to probe allegations against the NCP minister, and submit a report in six months.

Where it all started?

On March 17, Param Bir Singh was removed from his position as the Mumbai Police Commissioner and shunted to a "low-key" position as commandant general, Home Guards, for allegedly mishandling the investigation into an explosive-laden vehicle found near Mukesh Ambani’s residence, Antilia in February, in which Sachin Vaze has been arrested by NIA.

On March 20, he (Param Bir) wrote a letter to Maharashtra chief minister Uddhav Thackeray, accusing Deshmukh of asking the Mumbai cop Sachin Vaze to collect Rs 100 crore per month from bars, hotels, and restaurants in the city - an allegation denied by both the minister and his Nationalist Congress Party (NCP).