Anurag Thakur said 'a young political leader' did not even congratulate the athletes while BJP Youth Wing leader is creating awareness programmes for sports. 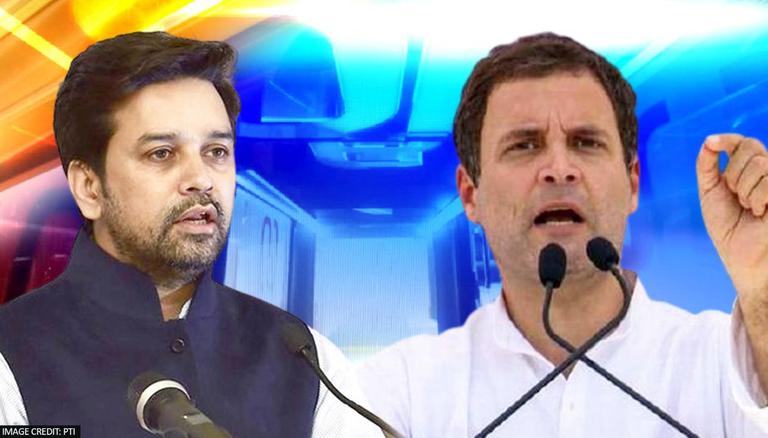 
Without naming Congress leader Rahul Gandhi, Union Sports Minister Anurag Thakur on Sunday said that a young political leader is 'shying away from congratulating our champions'. The attack from the Union Minister came after Rahul Gandhi did not congratulate the recent Paralympics winners however he has been tweeting regarding several other national matters. The country witnessed the best performance ever in the recently concluded Tokyo Paralympics 2020 with 5 Gold medals, 8 silver medals and six Bronze medals.

Anurag Thakur also compared Rahul Gandhi with Bharatiya Janta Party (BJP) Youth Wing President Tejaswi Surya and added that the latter is creating awareness programmes while the former is not even congratulating.

"On one hand, there is a Lok Sabha MP (Tejasvi Surya) who is organising sports events to create awareness. And there is another young leader from a political party who is shying away from even congratulating our champions and medal winners. I do not know why," added Anurag Thakur.

Both the BJP leaders were in Bangaluru on Sunday campaigning for the initiative- Fit India Movement. With several other party MPs, the two played Volleyball at Kittur Rani Channamma stadium in Bengaluru.

Congress leader Rahul Gandhi had congratulated Gold medalist Sumit Antil however no other congratulatory messages were seen after that.

Congratulations to Sumit Antil for the #Gold .
The nation applauds your record-breaking grit and determination.
#TokyoParalympics pic.twitter.com/LJdKV0uxNz

As the Tokyo Paralympics 2020 concluded on Sunday, team India's performance tally showed the best performance ever with some epic performances of athletes in different games. For Team India, the Tokyo Paralympics turned out to be historic as its athletes won 19 medals, including five gold that helped them sign off 24th in the overall tally - the highest ever. Tokyo Paralympics closing ceremony was headed by none other than the 19-year-old shooter Avani Lekhara, who won both gold and bronze medals in the mega-sporting event.

A total of 54 para-athletes from India across nine sports disciplines were featured in the Paralympic Games that started on August 24 and ended on September 5. August 24 and September 5. Badminton and Taekwondo made their debut in Tokyo, both of which were represented by India. Earlier, India had won 12 medals in total in the 2016 Rio edition.