"Arvind Kejriwal is known for speaking lies and has a record when it comes to lying. He is more of a Jhut Mantri," Union Minister Anurag Thakur said. 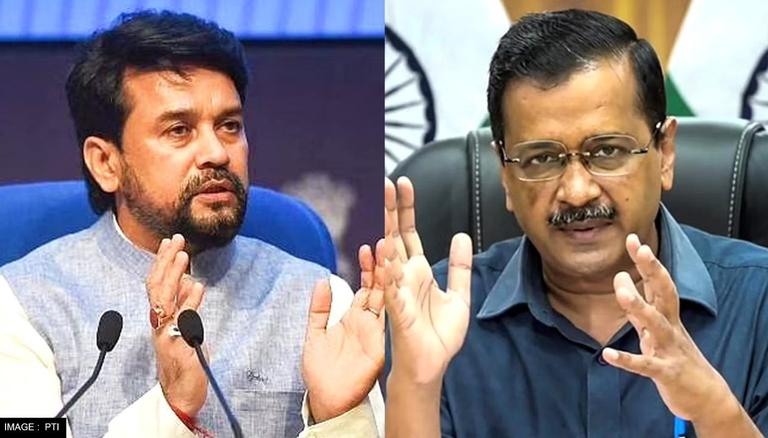 
Amid the war of words between the Aam Aadmi Party (AAP) and Bharatiya Janata Party (BJP) over the 'freebie culture' debate, Union Sports Minister Anurag Thakur said that Arvind Kejriwal is more of a "Jhut Mantri". Thakur averred that the Delhi Chief Minister has a record when it comes to saying lies in public and making false promises.

"Arvind Kejriwal is known for speaking lies and has a record when it comes to lying. He is more of a Jhut Mantri," the Union Minister said while speaking to news agency ANI, and accused Chief Minister Kejriwal of running "a corrupt government."

Hailing the BJP government for providing free ration to the poor during the times of COVID-19, the Union Minister said that the Central government provided free rations during the pandemic and even increased the budget for MGNREGA. "Delhi Chief Minister Arvind Kejriwal made false promises to the people of the capital during COVID and misled everyone," Thakur added.

Earlier in the day, AAP MP Sanjay Singh attacked the Centre over the rising prices of daily commodities. Addressing a press conference, Singh highlighted the increase in the GST on essential medicines required against deadly diseases. He also elaborated on the bank frauds that recently took place in the country during the BJP-led NDA government's rule.

Meanwhile, Delhi Chief Minister Arvind Kejriwal, countering PM Modi's 'revadi culture' warning, said that providing quality services to the people can't be considered freebies. Kejriwal also accused the Centre of waiving off the loans of industrialists and burdening the poor people. He said, "They brought Agnipath Yojna because the Central government is not able to bear the pension for the Retd soldiers. No Government has ever said that they do not have money for national security. The Centre refused to pay for this year's 8th Pay Commission. They are saying they don't have money."