Arvind Sawant Resigns From Modi Cabinet: 'Immoral For Me To Continue'

After announcing his resignation from the Union cabinet, Shiv Sena MP Arvind Sawant, on Monday, briefed the media confirming- displaying the resignation letter

After announcing his resignation from the Union cabinet, Shiv Sena MP Arvind Sawant, on Monday, briefed the media confirming the same. He stated that it was immoral for him to continue at his post, as he flashed his resignation letter to the medai. He also hinted at the Shiv Sena's separation from the NDA at the Centre.

'Immoral for me to continue' : Sawant

"Our alliance in the state is dead and a new government is going to be formed. In such a situation, for me to continue in my post is not moral or appropriate. Hence, I have tendered my resignation to Prime Minister Modi," he said. On being asked if the Shiv Sena has separated from the NDA at the Centre, he added, "As I have already submitted my resignation to PM Modi, you can understand what it means."

Slamming the BJP for calling Uddhav Thackrey a liar, he reiterated that BJP had indeed agreed to equally share the portfolios and the CM post on forming the government. He stated that this refusal had hurt Thackeray and the Thackeray family always keeps its promises. Arvind Sawant was the Union Minister for Heavy Industries & Public Enterprises in the Modi cabinet.

"After the Lok Sabha elections in Maharashtra when Uddhav Thackrey had talked about breaking the alliance, BJP had met with him and had agreed that in the upcoming Assembly polls, 50-50 division of seats had been decided. This was in view that when a government is formed along with the CM post all portfolios will be divided equally. This had been refuted by BJP and they claimed that such an agreement had not been decided at all. This statement hurt the feeling of friendship held by our party chief and Thackeray family keeps its promises," he added.

Here is his resignation letter: 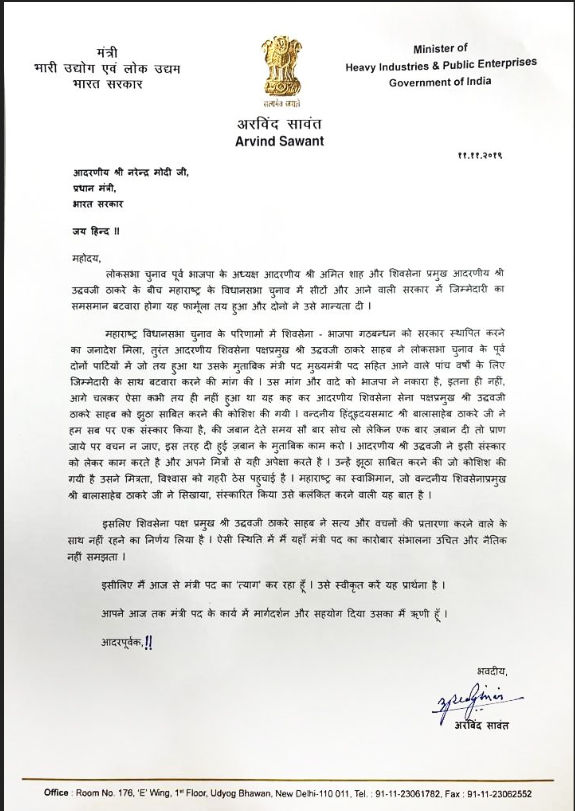 Blaming the Sena for fracturing the Mahayuti alliance, BJP announced that it would not form the next government in the state on Sunday, after meeting the governor. Sena, being the second-largest part was then invited to form the government - proving its ability by Monday evening- 7:30 PM. Both NCP and Congress are now in a huddle, talking with their MLAs discussing a possible alliance with the saffron party. NCP is currently waiting for Congress to decide on the alliance. Senior Congress leaders will meet with Sonia Gandhi to take a final call. BJP inspite of stating its inability to form the next govt, too is set to hold a core group meeting headed by Devendra Fadnavis. The major tiff between the two ideologically similar parties BJP and Shiv Sena is for the 50-50 formula and sharing the CM post for 2.5 years each. BJP has refused to both, with the BJP willing to give Shiv Sena 13 cabinet portfolios and keeping 26 portfolios for itself.

READ | Congress : 'Mandate is for Opposition, but High command will decide'

The saffron alliance swept Maharashtra on October 24, winning a combined tally of 161 (BJP- 105, Sena -56), but is yet to put its majority to use. Meanwhile, the 'Maha- Agadhi' alliance (NCP-Congress) bagged 98 seats in total. The halfway mark is 145.