Union Minister Amit Shah on Saturday reached Jammu and Kashmir di the first time since Article 370 was abolished in August 2019. 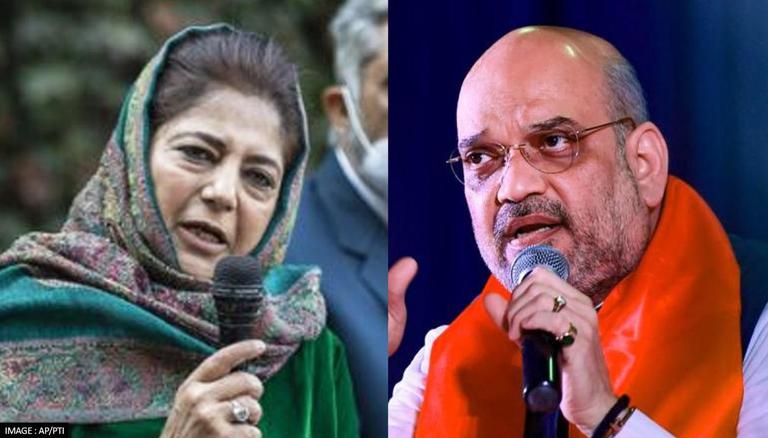 
Former Jammu and Kashmir Chief Minister and PDF president Mehbooba Mufti on Saturday attacked Union Home Minister Amit Shah and called inaugurating international flights and medical colleges a cosmetic step that will not address 'actual' problems in J&K. She said that ideally Shah's visit should have been preceded by a follow up on Prime Minister Narendra Modi's assurances post the all-party meeting in June this year.

"HM inaugurating international flights from Srinagar & laying the foundation of new medical colleges isn't new. Half a dozen medical colleges were sanctioned by the UPA gov(ernment) & are functional now. Post Article 370 abrogation & an engineered crisis, J&K has been thrown into chaos," Mehbooba said in a series of tweets.

Confidence-Building Measures such as lifting the siege that the union territory "has been put under since 2019, releasing prisoners, ending the harassment people here face on a daily basis, taking tangible steps to revive the economy esp(especially) horticulture would have provided a sense of relief." Mehbooba Mufti wrote.

"Instead prior to his visit 700 civilians were detained, booked under PSA & many shifted to jails outside Kashmir. Such oppressive steps further vitiate an already tense atmosphere. ‘Normalcy acrobatics’ are in full swing while reality is denied & obfuscated," she claimed.

Union Minister Amit Shah on Saturday reached Jammu and Kashmir for the first time since Article 370 was abolished in August 2019. On reaching the UT, shah immediately drove to meet the family members of a police officer killed by terrorists. Later, he cleared a meeting to review the security situation in the valley.

Addressing youths in Srinagar, Amit Shah said that August 5, 2019, will be written in Golding letters marking the end of terrorism, nepotism and corruption. He said that the youth has to contribute to the progress of the union territory.

"Today, I came to Jammu and Kashmir after around 2.15 years. It is a very happy moment for me as, after the security review meeting, I'm having an event with the youngsters of Youth Club," Shah said.

The Home Minister said that terrorism has reduced in the valley and stone pelting has become invisible. "I want to assure you that strict action will be taken against those who want to ruin the peace of J&K, no one can obstruct development here. It's our commitment," he said.