AIMIM chief Asaduddin Owaisi on Monday slammed the Delhi Police over the violence at JNU on Sunday. He also stated that the cops cannot beat the students.

AIMIM's Asaduddin Owaisi on Monday condemned the violent protests at Jawaharlal Nehru University (JNU) and questioned the Delhi Police over the violence at the campus on Sunday.

In his statement given to a news agency, the AIMIM chief condemned the violence inside the JNU and said, "The police created fear on the campus and injured so many students. There was a video that showed that the police gave safe passage to the masked men. When protesters came and protested, the same slogans of hatred were raised against the protesters."

"This is a central university in the capital of our country, For these kinds of incidents, it is for the government to decide on what kind of message you are sending to the whole world," he added.

Talking about the violence on the university campus, Owaisi said, "This cannot be allowed and has to be condemned, you are beating the students who are going to lead the nation tomorrow."

The AIMIM chief also questioned the Cyber cell branch of the police. "They mobilize people on WhatsApp, what is the cyber cell doing?" he asked.

Concluding his statement, the Member of Parliament expressed his hope that the government will rise above their party affiliations and arrest the perpetrators responsible for spreading violence.

Earlier in the day, AIMIM President also took to his official Twitter handle and questioned the Delhi Police and the Central Government over the violence at JNU. 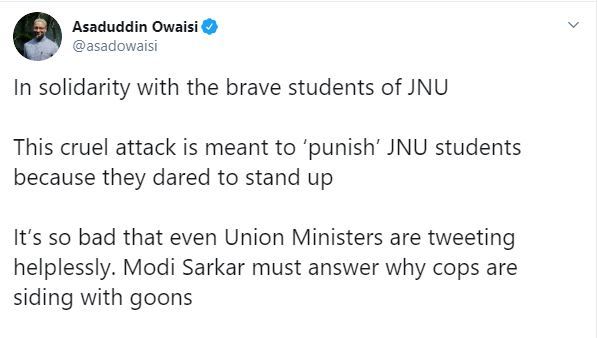 Violence broke out at Jawaharlal Nehru University (JNU) on Sunday night as masked men armed with sticks and rods attacked students and teachers and damaged property on the campus. At least 28 people, including JNU Students' Union president Aishe Ghosh, were injured as chaos reigned on the campus for nearly two hours.

Later, a delegation of students and teachers met the Delhi Police and put forth various demands before them, including urgent medical assistance to injured students and arrest of the accused behind the violence.

PEOPLE HAVE PLEDGED SO FAR
LATEST NEWS
View all
5 hours ago
Despite UP govt having over 70,000 buses, labourers had to walk home: Akhilesh Yadav
13 hours ago
Railways in mess, Piyush Goyal should be minister without portfolio: Ashok Gehlot
12 hours ago
Pained by migrants' sufferings, made arrangements for their travel: Home Minister Amit Shah
13 hours ago
Chhattisgarh: Former Chief Minister Ajit Jogi buried with full state honours
20 mins ago
Congress hits out at Centre for celebrating first anniversary of Modi Govt 2.0 amid crisis