Ending the blockade, Assam Ministers Parimal Sukalbaidya and Ashok Singhal supervised the smooth transportation of goods from Assam to Mizoram at Lailapur. 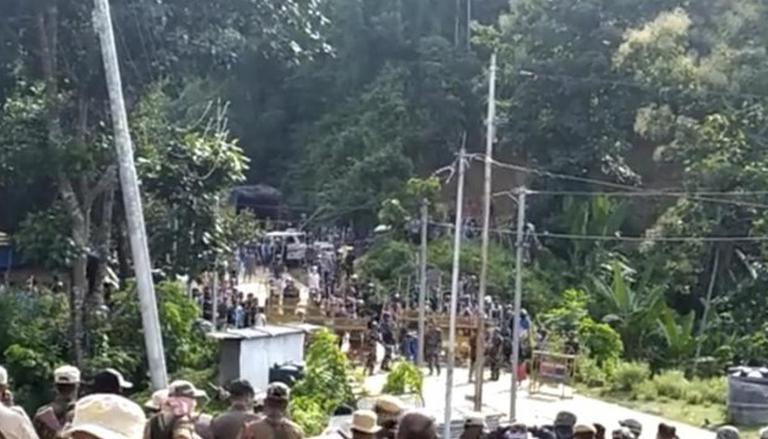 
Ending the 'economic blockade' at Assam-Mizo border, Assam Ministers Parimal Sukalbaidya and Ashok Singhal supervised the smooth transportation of goods from Assam to Mizoram at Lailapur. Taking to Twitter, Singhal stated that the ministers, accompanied by Cachar police Deputy Commissioner, had been stationed all through Saturday evening to appease protesting locals and truck drivers to ensure transportation. Six policemen and one civilian were killed in Assam on July 26 amid violence in the Assam-Mizoram border.

Talking to the media, Singhal said, "People residing near Lailapur border and Truck Driver association were gathered here when we reached at 5:30 PM. We appeal to everyone not to spread unauthentic news and rumours to ensure peace at the border. I thank Mizoram Home Minister Lalchamliana for assuring free & fair investigation into the incident".

The local people and some organizations had resorted to an "unofficial economic blockade" in the area bordering Mizoram since July 26, stated PTI. Both the ministers urged the people to refrain from any further protests or any unwanted circumstances along the routes to Mizoram to ensure smooth flow of essentials to the neighbouring state. As the ministers were engaged in discussions with members of the truckers association, the irate public started pelting stones and damaged two stranded trucks. Later, they agreed to withdraw the blockade and that movement of scores of stranded trucks on the Assam side of the border began on Saturday night.

Days after PM Modi met with North Eastern MPs, the Assam and Mizoram governments issued a joint statement agreeing to take forward the initiatives taken by Union Home Ministry and the respective state CMs to find an amicable solution to the border conflict via discussions. In the joint statement, Assam and Mizoram have also agreed that the two states will not send their respective Forest & Police forces for patrolling, domination or enforcement for fresh deployment to any areas where confrontation has taken place recently. The statement adds that the Mizoram government expresses its condolences for those who died on July 26 and wishes those who were injured a speedy recovery. Both governments have taken back FIRs against each others' CMs, MPs and MLAs and Assam has also revoked its travel advisory against Mizoram.

On July 26, five policemen and a civilian were killed during the violent clashes broke out between forces of both sides at the border area shared by Cachar district's Lailapur and Kolasib's Vairengte. Later, policeman  Shyamprasad Dusat succumbed to his abdominal bullet injury at Silchar Medical College Hospital, taking the death toll to seven. Assam claimed that Mizoram breached the existing status quo by commencing the construction of a road towards Rengti Basti thus "destroying" the Inner Line Forest Reserve in the Lailapur area. While Assam claimed that the Mizoram Police opened fire on the Assam officials and civilians with automatic weapons including LMGs which resulted in deaths, Mizoram alleged that they fired only after Assam police launched tear gas grenades at them.