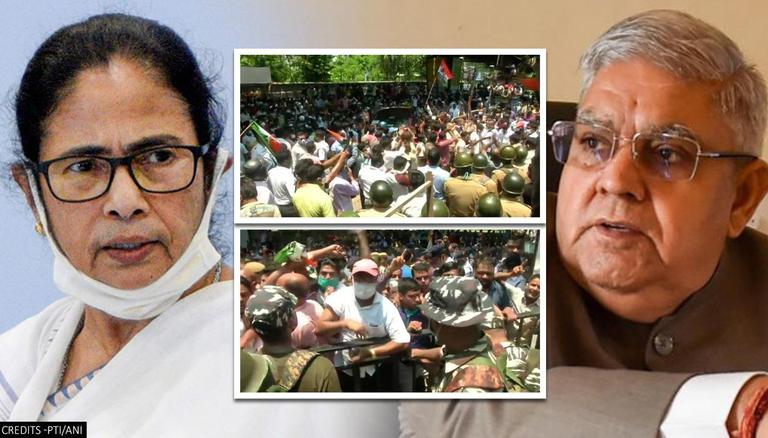 
Alarmed at the TMC supporters' violent protest outside CBI office in Kolkata, West Bengal Governor Jagdeep Dhankar on Monday, called upon CM Mamata Banerjee to 'follow constitutional norms'. Dhankar lamented that police and administration are in silent mode and that it was time to reflect and contain the explosive situation as TMC supporters resorted to stone-pelting at CRPF officers. The central agency has arrested top TMC leaders Madan Mitra, Firhad Hakim, Subrata Mukherjee and former TMC MLA Sovhan Chhaterjee, in the Narada sting case and will shortly produce them in court virtually.

Sad- situation is being allowed to drift with no tangible action by authorities.

West Bengal CM Mamata Banerjee, who has reached the CBI office in Kolkata, has dared CBI to arrest her as well. Banerjee has questioned as to how the Central agency had arrested the netas without the Speaker and state govt's, informed her lawyer to the media. Several other top leaders like Kalyan Banerjee, MP Santanu Sen and Ratna Chatterjee have arrived at the CBI office, while TMC supporters are staging a protest outside the office in Kolkata, resorting to stone-pelting security forces.

Earlier in the day, TMC minister Firhad Hakim claimed that he has been arrested by the CBI without prior notice after being called in for questioning. Senior TMC MLA Madan Mitra, minister Subrata Mukherjee and ex-TMC leader Sovan Chatterjee too were brought by to the CBI office along with Hakim. Recently, West Bengal Governor Jagdeep Dhankar sanctioned the prosecution of TMC leaders Firhad Hakim, Subrata Mukherjee, Madan Mitra and Sovan Chatterjee - erstwhile ministers in the purported Narada sting tapes, by the CBI. The CBI is probing the Narada sting tapes that came to light before the West Bengal Assembly elections in 2016 and sanctioned by the Calcutta High Court in 2017.

What is the Narada probe?

According to reports, Narada news portal chief Mathew Samuel had contacted the then deputy mayor of the Kolkata Municipal Corporation and IPS officer S. M. H. Mirza through local contacts in 2016. Reports add that Mirza then facilitated in establishing Samuel's contact with several top-ranking Trinamool officials like - Madan Mitra, Mukul Roy, Saugata Roy, Kakoli Ghosh Dastidar, Prasun Bannerjee, Subrata Mukherjee and Iqbal Ahmed to name a few. Ahead of the 2016 West Bengal assembly polls, Samuel had posed as a businessman of Impex Consultancy Solutions floated by Samuel himself to conduct a sting operation. Samuel while interacting with Mukul Roy and aides of Trinamool's Abhishek Banerjee had reportedly caught them on camera accepting bribes for illicit favours. Mirza was seen accepting Rs 5 lakh in cash from a businessman in one of the footages and has claimed that he was receiving the cash on Roy's instructions. CBI has arrested senior IPS officer SMH Mirza and questioned erstwhile TMC minister Mukul Roy too in connection to the case.