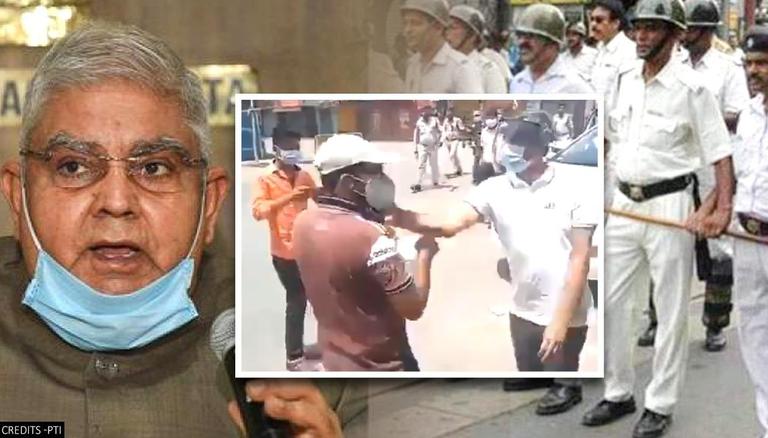 
Lauding the IAS association for condemning the Surajpur collector for beating up two Chhatisgarh youths, West Bengal Governor Jagdeep Dhankar on Sunday took a jibe at the Kolkata police to 'reflect on down sliding'. Dhankar pulled up the Kolkata police, claiming that they were in silent mode and that it was time to reflect and contain the explosive situation as TMC supporters resorted to stone-pelting at CRPF officers after 4 TMC netas arrest. Dhankar has often summoned Mamata Banerjee and the state DGP over 'law and order' situation, but has been consistently ignored.

Time for these to reflect on down sliding. https://t.co/7JERmQuscI pic.twitter.com/OQQ6b24qN2

On Saturday, a District Collector in Chhattisgarh was caught violently thrashing a man who was out on the streets allegedly to buy COVID-19 medicines for his family amid the lockdown. Despite Aman Mittal's (23) repeated explanations and attempts to show a piece of paper, Ranbir Sharma, District Collector from Surajpur can be seen ordering the cops to lathi-charge the man. Moreover, he can also be seen smashing the man's mobile phone when he attempts to show him something on the device. On facing social media ire, Sharma later apologised.

Later, IAS Association strongly condemned the behaviour of Ranbir Sharma saying that it went 'against the basic tenets of the service and civility'. A call to suspend him was also initiated by former J&K DGP Shesh Paul Vaid who stated that the law does not authorize any public servant to physically assault and destroy the personal property of any citizen. Immediately, Chhattisgarh Chief Minister Bhupesh Baghel came down heavily on Sharma's behaviour calling it 'unacceptable' and suspended Ranbir Sharma with immediate effect.

After Senior TMC MLA Madan Mitra, ministers Subrata Mukherjee, Firhad Hakim and ex-TMC leader Sovan Chatterjee were arrested on Monday in the purported Narada sting tapes, by the CBI, high-octane drama followed. TMC supporters staged a protest outside the office in Kolkata, resorting to stone-pelting security forces. West Bengal CM Mamata Banerjee too reached the CBI office in Kolkata and dared CBI to arrest her as well, questioning as to how the Central agency had arrested the netas without the Speaker and state govt's sanction. Dhankar had sanctioned the prosecution of the above-mentioned TMC leaders in the purported Narada sting tapes by the CBI. All ministers are now under house arrest.