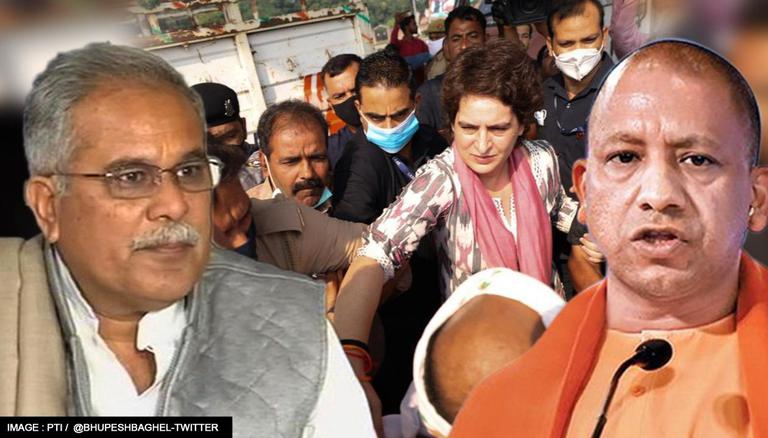 
Chhattisgarh Chief Minister Bhupesh Baghel on Wednesday criticised his Uttar Pradesh counterpart Yogi Adityanath after the UP police stopped Congress leader Priyanka Gandhi Vadra from going to Agra to meet the kin of a man who breathed his last in police remand on Tuesday. The AICC in-charge of Uttar Pradesh was later this evening was allowed to proceed towards Agra after she was stopped by the police earlier on the Lucknow-Agra expressway. Baghel who has been designated by Congress as the senior AICC observer for the upcoming Legislative Assembly elections scheduled to be held in 2022, took to his official Twitter handle and tweeted, "Chief Minister Adityanath Ji should understand that the more he puts obstacles in the way of Nyay "justice", the stronger our fight against injustice will be."

Baghel added, "When Lord Ram was heading to Lanka to fight against injustice, he was prevented by several hindrances but he did not stop and justice was done, Baghel said, adding the hashtag "Valmikiyo Ke Saath Priyanka" (Priyanka with Valmikis).

The accused, a sanitation worker, was arrested for stealing Rs 25 lakh from a police station storage room in Agra. Subsequently, six police personnel were suspended for "negligence" on Sunday. The accused had submitted the crime done by him, the police said.

As per the police, they had gone to recover the money from his house when the accused fell ill and was shifted to a hospital where he was declared brought dead. Following Priyanka Gandhi Vadra's attempt to visit Agra to meet the family of the sanitation worker, the Agra District magistrate imposed Section 144 in the region to prevent political leaders from visiting the city. The police have cited a potential law and order issue in the aftermath of the sanitation worker's death.

Issuing a statement on Priyanka Vadra's detention, the Agra Police said, "Section 144 is imposed. Congress leader Priyanka Gandhi Vadra is being taken to Police Lines. She will not be allowed to proceed to Agra." Later in the evening the police allowed the Congress leader to move towards Agra. The Lucknow police allowed four people, including UPCC president Ajay Kumar Lallu and senior leader Acharya Pramod Krishnam, to accompany Priyanka Gandhi, Congress Spokesperson Anshu Awasthi said. "She was neither taken into custody nor arrested. Because of the massive crowds, the traffic movement was being hampered and she was first asked to either go to the party office or her residence but when she did not agree, she was sent to the police lines," Lucknow Police Commissioner D K Thakur said.

(With PTI Inputs, Image by PTI/@BHUPESHBAGHEL-TWITTER)