Not even six months after the formation of the government of Mahagathbandhan in Bihar, cracks seem emerging in the seven-party alliance. 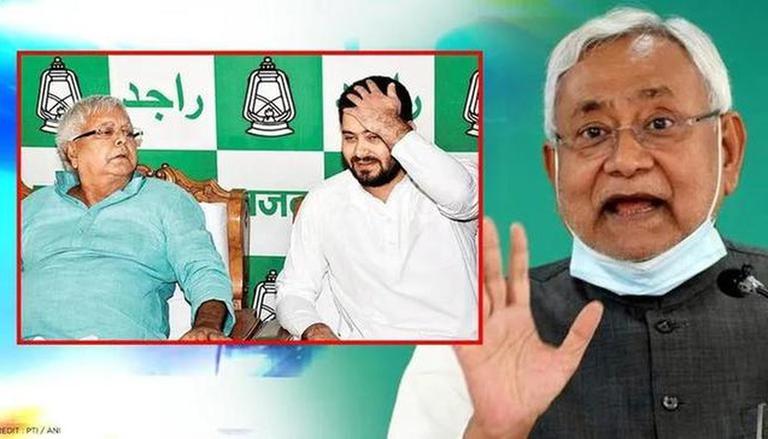 
Not even six months after the formation of the government of Mahagathbandhan in Bihar, cracks seem emerging in the seven-party alliance. Addressing the media, Bihar Chief Minister Nitish Kumar in front of his Deputy Tejashwi Yadav indirectly referred to the 'Jungle Raj' prevailing in his father, former CM Lalu Prasad Yadav's regime.

"Earlier, very few girls used to go to school, and study in Bihar. If a woman used to enter the classroom as a teacher, or a professor, there used to be disbelief. Everyone used to look in astonishment. Now, things have changed," Nitish Kumar said to the reporters, as Tejashwi Yadav stood by his side.

Pertinently, a few days back, Sanjay Kumar Jha, National General Secretary of the Janata Dal-United and Minister of Information and Public Relations of Bihar had echoed a similar statement. Jha had claimed that during the 10-15 years of Nitish Kumar's rule in Bihar, the state has undergone a revolution, especially in the field of education. He cited the number of girls being equal to the boys in the matriculation as an example to buttress his point.

This comes at a time when there are speculations about Tejashwi replacing Nitish as the Chief Minister of Bihar. In fact, a few days back, RJD Bihar President Jagdanand Singh had claimed that by 2023, 'Nitish Kumar will hand over the reins of the state to Tejashwi'.

However, in a meeting of the grand alliance, Nitish Kumar said that Tejashwi will be the Chief Ministerial face of the seven-party alliance for the Assembly Elections in Bihar, scheduled for 2025.

In the 2020 Assembly elections of Bihar, the National Democratic Alliance (NDA) edged past Mahagathbandhan to win the Bihar elections, with the BJP emerging as the dominant partner for the first time in about two decades. The JDU won 43 seats, and together the parties under the NDA pulled ahead with 125 seats against the Grand Alliance’s 110, 75 of which were secured by the RJD while the Congress and Left secured 19 and 16 seats respectively in the 243-member Assembly.

In spite of not getting a good number of seats, the JDU supremo was given the Chief Ministerial post but things were not smooth in the NDA government. Ties between Kumar and the BJP kept souring for months, with divergence on a slew of issues including the Pegasus row until JDU stepped out of the NDA in August this year.

The party then tied up with RJD, Congress, and four other parties to stake a claim in the state government, with Nitish Kumar retaining the Chief Ministerial post and Tejashwi Yadav being sworn in as his deputy.