Union Minority Affairs Minister Mukhtar Abbas Naqvi on Wednesday said that it is the duty of the Mamata Banerjee-led government to free the state of violence. 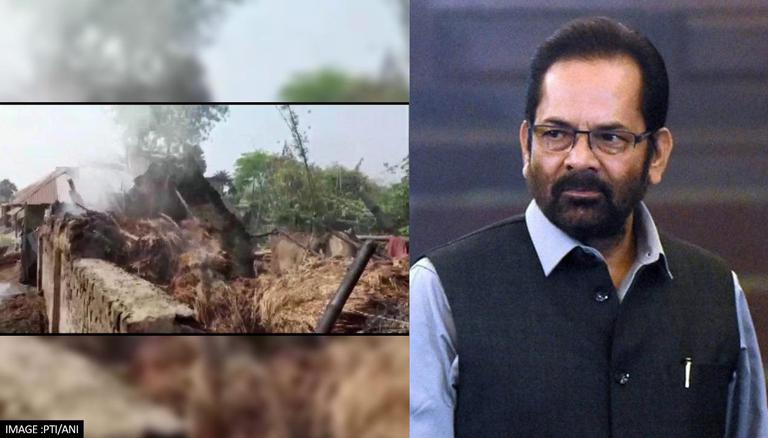 
Tension has intensified in West Bengal’s Birbhum district, a day after several houses were set on fire. Responding to the incident, Union Minority Affairs Minister Mukhtar Abbas Naqvi on Wednesday said that it is the duty of the Mamata Banerjee-led government to free the state of violence.

"Bengal has its own grace. It is the state government's duty to free Bengal of violence", Naqvi stated.

He further mentioned that the TMC-led government is responsible to ensure law and order is maintained in the state. "TMC talks about federal structure, they are supposed to handle law and order", the Union Minister added. He then urged the people of the state to decide if they want the TMC party which is under the hands of 'anarchist' to run West Bengal.

Bhadu Sheikh, the deputy chief of ruling Trinamool Congress (TMC) controlled-Barshal gram panchayat was murdered on Monday following which an irate mob set ablaze several houses in which several people were burnt alive. When Bhadu Sheikh was at a shop on NH-60, he was attacked with bombs. The panchayat functionary of Barosal village was taken to a nearby hospital where he was declared dead on arrival. This provoked a mob attack and as a result, several houses of the opposition gang were reportedly set on fire at the village of Bhadu Sheikh.

Fire officials said that around a dozen houses were set on fire but when they reached the spot to control the fire, they were not allowed to do their job. They mentioned that it is very difficult to identify the bodies as they had been completely charred. Fire officials said that from a single house seven bodies were traced. The bodies were sent to Rampurhat Medical College Hospital for autopsy.

The Ministry of Home Affairs (MHA) has sought a report on this incident within 72 hours. While West Bengal DGP Manoj Malviya had clarified that the incident doesn't seem to be the result of a political rivalry between two parties. the SP of Birbhum has been requested by the National Commission for Protection of Child Rights to conduct an investigation and submit a report within three days.